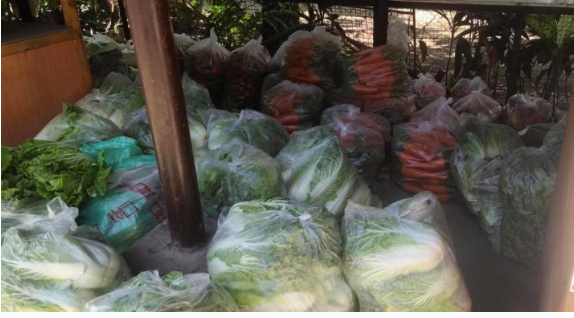 Fresh vegetables from farmers in Dalaguete town in southern Cebu are among the produce sold at the Kadiwa Cebu center at the Department of Agriculture in Central Visayas office in Barangay Maguikay, Mandaue City. | DA-7 FB post

CEBU CITY, Philippines—A project designed to bring farm products closer to the market in the province of Bohol and Cebu generated almost P700,000 for the participating farmers during the official launching of the Kadiwa ni Ani at Kita (Kadiwa) held last week.

In a post on the DA-7 Facebook page, Salvador Diputado, Department of Agriculture in Central Visayas regional director, said that Bohol farmers earned P390,193 from the sale of their farm products while Cebu farmers sales reached P302,086 for two days only, or a total of P692,279.

According to DA-7, the Kadiwa on Wheels, launched in front of the Dauis municipal hall in Bohol, featured fresh vegetables and seafood. It is scheduled to be brought to other Bohol municipalities every week.

DA-7 and the Bureau of Fisheries and Aquatic Resources (BFAR) in Central Visayas launched the activitiy in coordination with Bohol province through Governor Art Yap and the municipality of Dauis through Mayor Marietta Sumaylo.

On the other hand, the Cebu Kadiwa is now on its regular schedule every Thursday and Friday at the DA-7 regional office in Barangay Maguikay, Mandaue City.

The farmers from Cebu City mountain barangays and the municipality of Dalaguete will be selling various fresh fruits, vegetables, eggs and other agricultural products.

To provide assistance to fishers and fish vendors from Pasil, Cebu City sell their catch, BFAR 7 also participated in the Kadiwa at the DA-7 regional office. BFAR used its reefer van to transport some 200 kilos of assorted fishes for display at the Kadiwa.

According to DA-7, they will also schedule other Kadiwa on Wheels in other towns of Bohol as well as in other provinces of the region.

The Kadiwa is a marketing strategy of the Department of Agriculture to bring fresh farm produce to the local community without the middlemen during this enhanced community quarantine./dbs