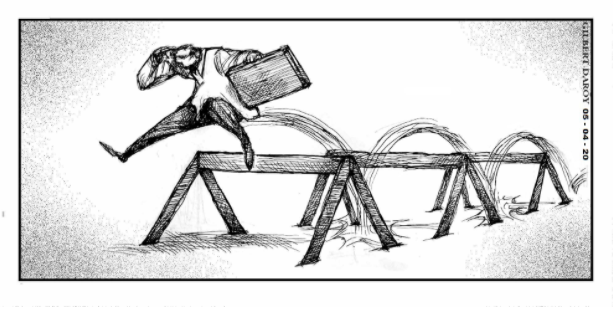 Income reports for the first quarter of the year are starting to paint a grim picture for many companies adversely affected by the coronavirus pandemic. The impact on businesses is mostly unfavorable, except for a very few that appear to be surviving the people mobility issues triggered by the COVID-19 health crisis.

Overall, the Philippine economy is projected to suffer up to P1.1 trillion in revenue losses this year because of the pandemic. Socioeconomic Planning Secretary Karl Kendrick T. Chua last week warned that the country should brace for poor first-quarter official economic data, which are to be released this Thursday, due to a triple whammy — the eruption of Taal Volcano in January, the COVID-19 lockdown in China, and the Philippines’ own lockdown to fight the disease starting March 15.

By economic sector, the biggest loser has been tourism, especially with the ban on travel imposed by the major sources of tourism dollars for the country. The Department of Tourism last week reported that revenues from foreign arrivals slumped by 35 percent in the first quarter due to COVID-19. Based on its estimates, the country earned only P85 billion from January to March, compared to P134 billion a year ago.

As majority of Philippine companies saw revenue streams plugged by the lockdown, banks are expecting a deluge of loan-restructuring applications and potentially higher loan defaults.

Higher provisioning for probable credit losses trimmed the Bank of the Philippine Islands’ first-quarter net profit by 5 percent year-on-year to P6.39 billion. It booked P4.23 billion in provisions for possible loan losses in the first quarter. The Metropolitan Bank & Trust Co., meanwhile, said its net income of P6.1 billion for the first quarter was down by 9.3 percent from a year ago, similarly on higher provisions totalling P5.04 billion made for possible credit losses.

Non-banks have also reeled from the economic slowdown caused by COVID-19. The conglomerate Aboitiz Equity Ventures (AEV) posted a 42-percent drop in first-quarter net profit to P2 billion due to slower earnings from its flagship power business, as the closure of many establishments and factories pulled down demand for electricity by about 40 percent in March and April.

Manila Electric Co. (Meralco) has already invoked “force majeure” as basis for the distribution giant not paying for the electricity that it contracted with suppliers but did not take in due to a steep drop in demand.

The gaming and entertainment sector is another casualty. The state-run Philippine Amusement and Gaming Corp. saw net income fall by half to P777 million in the first quarter. Casinos across the country were ordered closed as part of efforts to contain the spread of the contagion. As such, private casinos like Resorts World Manila and Solaire are expecting huge losses at least for the first half of 2020.

There are exceptions, however, like companies engaged in supermarkets and groceries, courier service apps, and even some restaurants that are thriving on deliveries and take-out services after dine-in operations were shuttered. For example, panic-buying in supermarkets before and during the start of the lockdown of Luzon in mid-March boosted the first quarter net profit of Robinsons Retail Holdings Inc. (RRHI) by 45 percent year-on-year to P923 million.

While it may be too early to assess the overall economic impact of the pandemic, the first-quarter financial reports trickling in are already providing a clearer picture of the severe damage that COVID-19 has caused, especially on companies engaged in non-essential services, and the deep economic rut the Philippines has to manage as the threat of the pandemic lingers without a vaccine in sight.