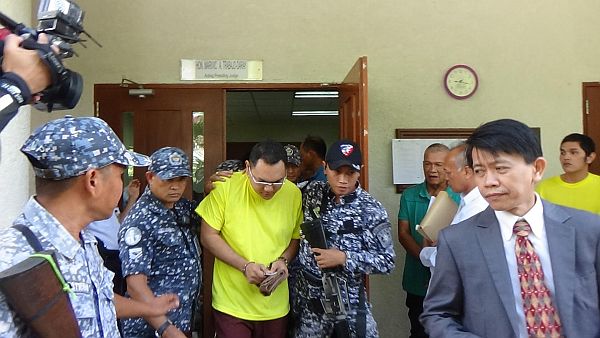 In this 2017 photo, former Bohol Board Member Niño Rey Boniel is escorted out of the courtroom after his arraignment on charges of kidnapping and serious illegal detention filed by his wife’s best friend Angela Leyson. | Leo Udtohan/Inquirer Visayas

CEBU CITY, Philippines —  As the coronavirus infection breached penitentiaries in Cebu, even the high-profile detainees who are incarcerated in the same cells as the other inmates begin to fear of contracting the virus.

Former Bohol province board member Niño Rey Boniel, for instance, has requested the court to allow him to post bail due to the imminent danger of contracting the infection inside the Cebu Provincial Detention and Rehabilitation Center (CPDRC) where he is incarcerated.

His counsels, in a very urgent petition for bail filed before the Cebu City Regional Trial Court (RTC) Branch 22, said he “could not help but to worry every minute of the day for fear [for] his life which has been seriously threatened since day one of the NCOV-19.”

Read: Bohol Board Member Boniel charged with parricide in court

“In fact, he has already showed mild symptoms of the infection like colds and headaches although he has not yet been submitted to test due to the DOH’s limitation to conduct mass testing for NCOV-19 in detention cells,” Boniel’s counsel said.

The former government official, who is facing parricide charges for the disappearance and alleged death of his wife, former Bien Unido Mayor Gisela Bendong-Boniel in 2017, is incarcerated in CPDRC which has so far logged 25 COVID-19 cases. The Cebu City Jail across CPDRC are in even worse numbers now at 337.

But for failing to comply with the required document format, missing signatures of lawyers in the electronic file, and sending to a wrong e-mail address, the court has denied action on Boniel’s plea to post bail.

Branch 22 Acting Presiding Judge Dax Gonzaga Xenos did not grant Boniel’s petition for failure to comply and submit the petition in the formats and email address prescribed by the court.

“Considering that the respective signatures of counsels do not appear in the pleading, it was not sent in the required PDF format, and there being no showing that it can be filed online under applicable SC circular, the Very Urgent Petition for Bail filed yesterday by accused Niño Rey Boniel through the previous, and not official, email address of the court is that produces no legal effect and is thus not acted upon,” Judge Xenos ordered on May 6.

Carillo, in a message reply to CDN Digital, said they have already filed a motion for reconsideration before the court on their request to post bail.

This is the second time that Boniel’s camp tried to ask the court to recommend a bail since his detention in June 2017. No bail has been recommended for Boniel on the assumption that the evidence of guilt against him is strong.

“The NCOV-19 pandemic is no doubt a compelling reason for this Honorable Court to use equitable consideration and exercise its discretion to grant the accused bail while the case against him is on trial,” Boniel’s camp argues. / dcb