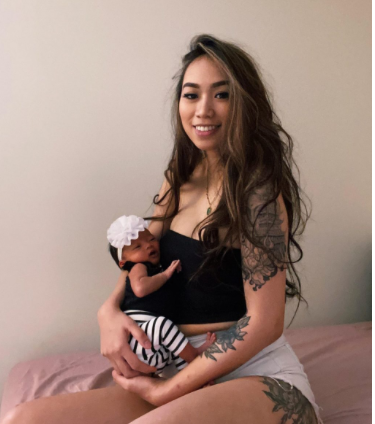 Mary Angeline Ang, a Cebuana frontliner in the U.S. says giving birth to her baby, Zelaya Eve, has brought her happiness despite the fear of the threat of the coronavirus pandemic. | Contributed Photo

CEBU CITY, Philippines– They say that the true essence of a woman is becoming a mother, young girls dreaming to be mothers someday and dreaming to build their own families.

This 23-year-old patient care technician instructor from Virginia, USA, talks about the fear, loneliness, and happiness all at once as she gives birth to her firstborn in the middle of a pandemic.

Mary Angeline Ang was born and raised in Cebu to a Chinese-Filipino family. Ang, who is the youngest among five siblings and the other girl among the siblings, is used to being the baby around.

But everything changed after high school graduation back in 2013 when Ang decided to try her luck in the United States and see where life will take her.

Ang’s mother, Evangeline, was also in the USA but living in another state.

For seven years now, Ang has been working away from her family here in Cebu and away from her mother and other siblings in the States.

Everything was going just right for Ang, she knew she was pregnant last year with her beau and then all of a sudden a pandemic outbreak happened.

“I was about to give birth when the pandemic happened, and I still continued going to work even with the fear to help in our hospital during this crisis situation,” said Ang.

It was a scary thing for Ang to do, considering the current crisis situation, she knows that she will endure all these and will have a healthy baby come to the world with a lot of precautionary measures and prayers.

“It was scary and still is. Since I work at a hospital, I know how bad/severe the pandemic is. Our hospital only allowed 1 visitor throughout the whole stay,” she said.

It was just her partner, Razale Ragland, who was her best support system at that time.

Luckily, when the time came for Ang to give birth, all her fears turned to strength and that she made sure to endure all the pain and fear as she welcomes a new angel to the world.

It was on April 16, when Ang and her partner were able to see for the first time their own bundle of joy, their baby girl, Zelaya Eve.

“As a first-time mom, one of my greatest fears was not knowing what to do with a whole baby. I was worried I wouldn’t know how to care for someone who can’t talk and tell me what’s wrong or what they want in their first few years, but seeing her, healthy I know it will all be worth it,” said Ang.

Although her family was not able to be there during her first time giving birth, they were virtually present then and now that Ang is starting to adjust to the whole mom-world.

“Still adjusting, the fear is always there. I just have to take extra precautions and trust that everything will be okay,” she added.

To all our brave mothers out there, Happy Mother’s Day! /dbs

Read Next
PWD, one of poorest of the poor in Lapu, gets gov’t aid