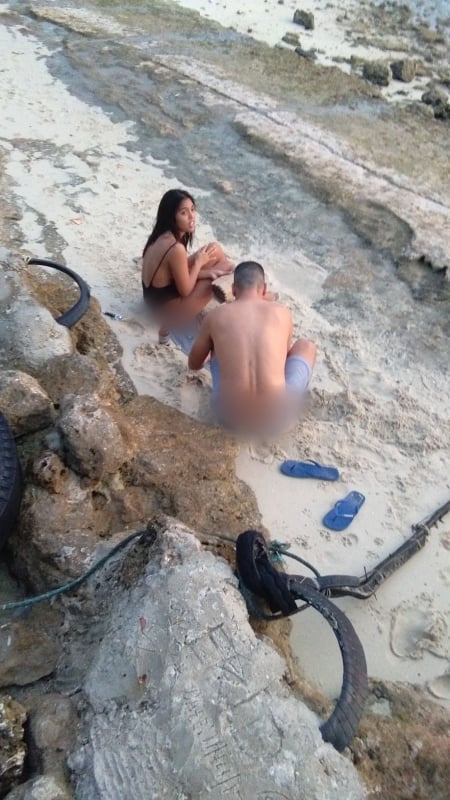 Beauty Queen Maria Gigante and her foreign boyfriend were arrested by Moalboal police after they were caught swimming on the waters of Barangay Basdiot on Sunday, May 10, 2020. | Contributed Photo

CEBU CITY, Philippines — They did not only defy the prohibition against swimming on the beach while the enhanced community quarantine (ECQ) remains in effect.

Maria Gigante and her boyfriend, Javier Filosa Castro, were also found by Moalboal police drinking beer while enjoying the beach in Barangay Basdiot in Moalboal town late on Sunday afternoon, May 10, 2020.

Police Senior Master Sergeant Jennelyn Awe, desk officer of the Moalboal Police Station, said that complaints for disobedience to a person in authority in relation to Governor Gwendolyn Garcia’s executive order on ECQ protocols and the liquor ban in Moalboal town imposed by a separate EO of Mayor Paz Rozgoni, a criminal offense under the Revised Penal Code, is now being prepared against Gigante, 26, and Castro, 25.

Garcia’s EO 5-L which “Provide Additional Mitigating Measures to be Implemented Within the Province of Cebu to Combat the COVID-19” prohibits beach activities. It was adopted by the Cebu Provincial Board in the same month.  The PB ordinance provides a P5,000 fine and/or imprisonment of up to one year upon the discretion of the court.

The two were immediately placed in an isolation cell at the Moalboal Police Station after police found out that they came from Cebu City where more than a thousand cases of the coronavirus disease were already recorded.

Awe said that the two arrived in their town on board a private vehicle.  They were made to pass through the quarantine checkpoint after they told policemen who were manning the checkpoint that they came from Dalaguete town and were headed for Alegria town for relief goods distribution.

Tourist police, who were patrolling the coastal area of Barangay Basdiot, found the Gigante and Castro.

Awe said they continue to conduct follow up investigations to determine how the two made it out of Cebu City. / dcb

Read Next
COVID – 19 in Cebu City: ECQ and mass testing