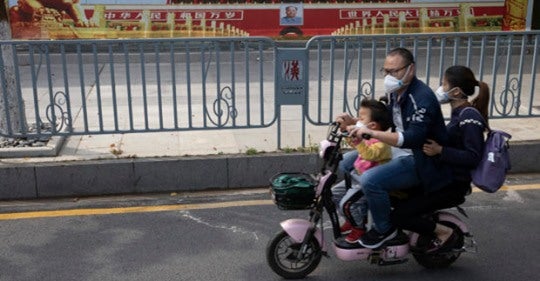 BEIJING — China reported a second day of new cases of coronavirus in Wuhan on Monday after a month without new infections at the pandemic’s global epicenter, offering a stark warning of the dangers of a fresh wave.

It subsequently spread around the world.

Authorities in Wuhan imposed draconian restrictions on travel and movement in what appeared to have been a successful bid to quash the outbreak.

That lockdown began to ease in recent weeks, as authorities said the disease was under control, most recently with children returning to school, and travel to and from the city allowed.

But on Sunday authorities acknowledged one person had tested positive for the virus in Wuhan, and a day later, they said there were five more cases.

The news of new infections at the global ground zero comes as many European nations begin the tricky task of navigating out of lockdowns imposed to halt the spread of the virus.

It also comes as swathes of the United States ease restrictions on movement — despite still rising rates of infection — and as citizens chafe under rules many say are government overreach.

Health experts warn that too hasty a return to normal could spark a second wave of infections, and point out that restrictions will have to remain until there is a vaccine.

At least 11 cases connected to a local laundry worker were reported over the weekend, according to state broadcaster CCTV, prompting the citywide lockdown of Shulan, with a population of around 670,000 people.

The virus has now infected more than four million people worldwide — claiming more than 280,000 lives — and crippled the global economy.

No new deaths have been reported nationwide for nearly a month, with life in China gradually returning to normal after months of disruption.

China has faced criticism both at home and abroad for downplaying the virus and concealing information about the outbreak when it first emerged in Wuhan. Doubt has also been cast over the official toll.

Beijing has insisted it has always shared information with the World Health Organization and other countries in a timely manner.

Read Next
WHO cautions against use of Madagascar anti-virus potion