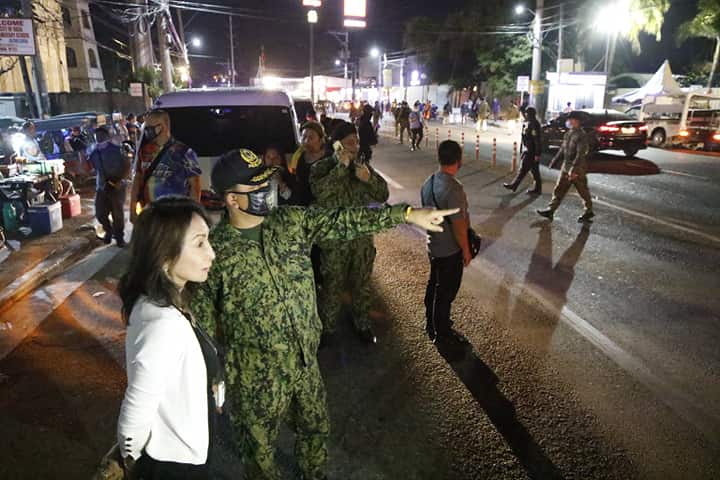 Brigadier General Albert Ignatius Ferro discusses with Governor Gwendolyn Garcia the measures taken in the health checkpoints set by the PNP in the different parts of the province. | Photo by Capitol PIO/Tonee Despojo

In a phone interview with reporters on Monday, May 11, 2020, Ferro said that he would be recommending to the Inter-Agency Task Force for the Management of Emerging Infectious Disease (IATF-MEID) to extend the ECQ implementation until May 30, 2020.

This after the number of positive coronavirus disease 2019 (COVID-19) cases continues to rise especially in Cebu City, which has tallied 1,566 cases as of Sunday, May 10.

“I will recommend for the extension because of the evidence that we are getting, daghan na nga mga numbers nag positive sa mga different areas and sa atoang jail. So we need to test more and conduct contact tracing so that we will be able to find out kung asa tong icontain nato… For me we expect [the ECQ extension] until the end of this month,” said Ferro.

The PRO-7 director said that the ECQ extension would allow them to execute plans on how they would be containing the areas with the most number of cases and what else to do with those that still had zero cases.

The ECQ extension is also important for completing the massive testing as well as the continuation of the “3T” approach or the test, trace and treat method to fight the virus.

However, Ferro assured that while the cases had continued to rise, it did not mean that the government had been badly handling the COVID-19 cases as the mortality rate had stayed low despite the rising cases.

He said that it was only natural that cases would rise since the government in the city had been conducting massive testings, which meant that more would be found out to have been virus carriers./dbs