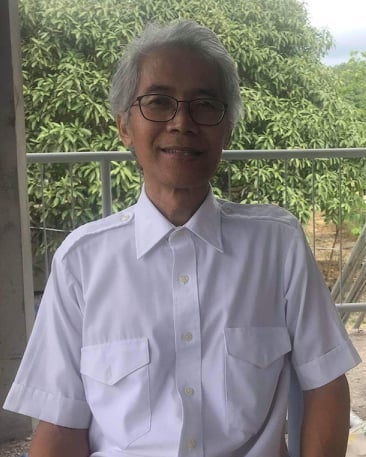 CEBU CITY, Philippines — As a child, Dr. Dale Pasco has never encountered or personally experienced the traditional way of Cebuanos to alleviate respiratory infection through steam inhalation or known as ‘tuob’.

But the physician and former professor of a Cebu City-based medical school took a recent interest in steam inhalation as a possible cure of coronavirus disease 2019 (COVID-19) and other respiratory illnesses.

Pasco is a surgeon who practices Natural Medicine and advocates a plant-based lifestyle.

Spotlight will shine on this doctor this Tuesday, May 11, as he is summoned before officials of Cebu City Hall to provide insights on steam inhalation.

The native of Clarin, Misamis Occidental is also coming up with research that aims to prove that steam inhalation, a form of hydrotherapy, can heal.

“As of now, I have collected 26 cases from friends around the world, including New York, who have used steam inhalation as means to improve their health conditions,” Pasco told CDN in a phone interview.

Pasco said he was hoping to collect more data and information for his study, with the help of other doctors who also shared the same advocacies and health principles with him, and that their efforts would come to fruition in order to provide more solutions in the future.

The doctor developed a fascination with hydrotherapy or the use of water as a form of treatment. Sometime in 2015, he even visited Michigan in the United States to trace the legacy of American doctor John Harvey Kellogg.

Kellogg was known for running Battle Creek Sanitarium in Battle Creek, Michigan, a once-renowned hydrotherapy institution between the 19th and 20th centuries.

And in 2019, Pasco’s interests in hydrotherapy sparked again when in a visit to Malaysia, he stumbled upon the use of steam inhalation similar to that of tuob in Cebu.

The most striking case Pasco had, however, was that of his sister from New York who recently recovered from COVID – 19.

New York is tagged as the epicenter of the COVID-19 outbreak in the United States, which has now infected over 1 million individuals.

According to Pasco, his sister was already having difficulty in breathing and was about to be intubated when he recommended her to do steam inhalation.

“If it’s done properly, I am confident that this would help and provide relief to our patients,” he told CDN over the phone.

Cebu City has over 1,500 confirmed COVID-19 patients, the majority of whom are considered as asymptomatic and only display mild symptoms of the disease.

However, to prevent the virus from spreading rapidly, the city government has decided to place them inside Barangay Isolation Centers (BICs) until they have recovered.

While staying inside BICs, officials of Cebu City Council are now considering to provide each of them with steam inhalation equipment to help them recover faster.

They have invited Pasco to provide them insights and advice regarding this type of hydrotherapy.

But what Pasco is referring to is entirely different from the traditional tuob most Cebuanos have known and practiced in their respective homes, and that he will be introducing to city hall officials the proper techniques in doing steam inhalation.

Nevertheless, the doctor assured that while steam inhalation is a kind of hydrotherapy, like the improvised and make-shift tuobs as home remedies, it is ‘simple and effective’.

“If you incorporate this with a plant-based lifestyle, or we call it also as vegan diet, remain healthy, we might as well beat COVID-19 and hopefully other related illnesses,” Pasco added in a mix of English and Cebuano./dbs

Read Next
LTFRB: No fare increase on all PUVs once ECQ is lifted