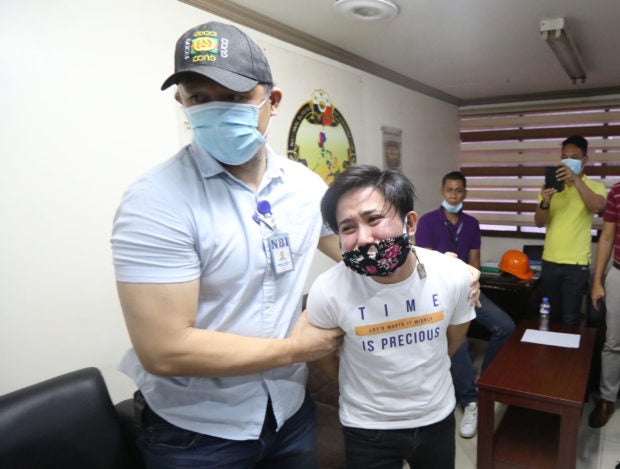 TEARS OF CONTRITION Ronnel Mas, a 25-year-old public school teacher from Masinloc, Zambales, breaks into tears when arrested by agents of the National Bureau of Investigation on Tuesday over a Twitter post offering P50 million to anyone who could kill President Duterte. Mas later apologized to the President, saying he just wanted his social media post to be noticed. —MARIANNE BERMUDEZ

MANILA, Philippines — A public school teacher knelt and wept as he apologized for offering a P50-million bounty to anyone who would kill President Rodrigo Duterte.

Ronnel Mas, a resident of Masinloc town in Zambales who taught at Taltal National High School, was arrested on Monday by agents of the National Bureau of Investigation.

When presented to the media at the NBI Manila office on Tuesday, the 25-year-old apologized for tweeting, “I will give [a] P50 million-reward to whoever will kill Duterte #NoToABSCBNShutDown,” on May 5.

Mas said it was a joke, adding: “I merely matched the P50-million reward [Duterte] offered for a vaccine [against the coronavirus].”

“I apologize to President Duterte for posting that tweet,” he told media, saying he just wanted to get noticed for his post.

“We are already in a crisis and I added to the problem. With all my heart, I regret what I have done,” he added.

NBI Cybercrime chief Vic Lorenzo said that among the possible cybercrime violations of the tweet was “inciting to sedition.”

Antonio Pagatpat, NBI deputy director for operation for regional services, added that while the country was in the middle of a public health crisis, they did not want another problem that could worsen the situation.

“The threat to the President is a serious thing,” he said.

Mas had deleted his tweet but not before some netizens took a screenshot of the post, which was the basis for the NBI to arrest him.

His students appealed for understanding. One of them said Mas was one of the teachers she admired. “He is depressed so please, if you still have compassion and respect for yourself and others, you should never intervene, judge and [demean] others,” the student said on a Facebook post.

Mas was charged in the Department of Justice with violating the Cybercrime Prevention Act and Code of Conduct and Ethical Standards for Public Officials. —With a report from JOANNA ROSE AGLIBOT

Read Next
KUWENTONG KULE: Nostalgia of college life: Eraserheads as my dorm roommates