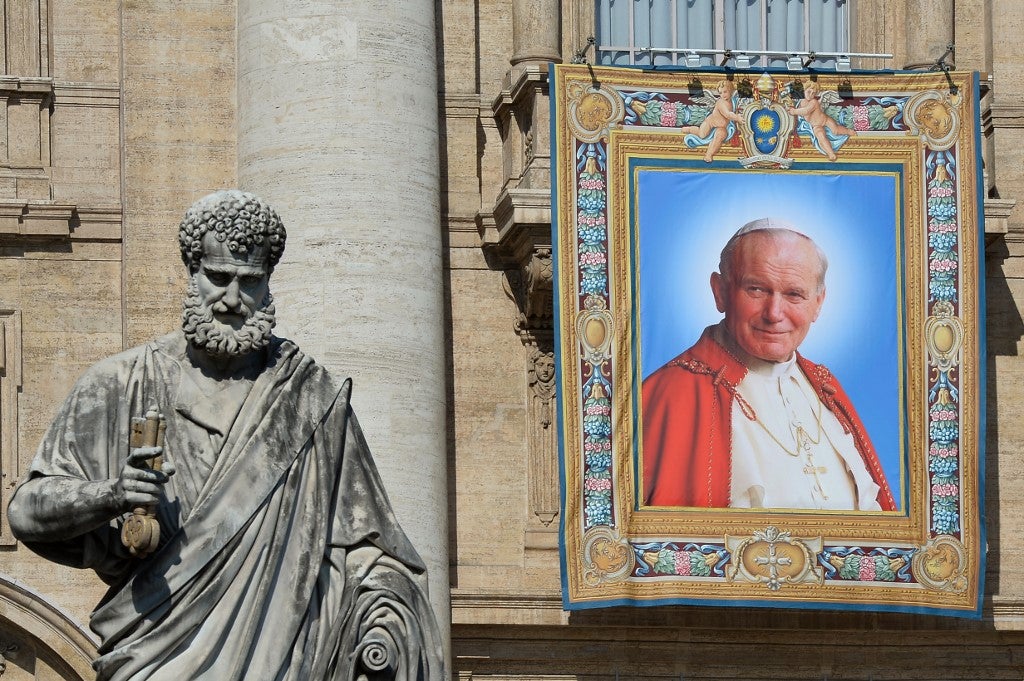 View of the tapestry showing a portrait of late Pope John Paul II hanged on the balconies of St Peter’s basilica on April 25, 2014 in Vatican, two days before his canonisation along with Pope John XXIII. Popes John Paul II and John XXIII will join the roster of saints at a historic Vatican ceremony on Sunday seen as an attempt to unite conservatives and reformists, with some 800,000 pilgrims expected in Rome. The double canonisation of two of modern-day Catholicism’s most influential figures will be presided over by Pope Francis and may be attended by his elderly predecessor Benedict XVI, bringing two living pontiffs together to celebrate two deceased predecessors. AFP PHOTO / ALBERTO PIZZOLI (Photo by ALBERTO PIZZOLI / AFP)

ROME — Emeritus Pope Benedict XVI has honored St. John Paul II on the centenary of his birth and floated the idea that he should be called “the Great,” as only two other popes have been.

John Paul’s longtime secretary, Cardinal Stanislaw Dziwisz, held a press conference in Krakow, Poland, on Friday to present a letter by Benedict, which was released to the media in a half-dozen languages. The fanfare suggested that Dziwisz wanted to draw attention to the praise of his beloved John Paul, who was born 100 years ago this coming Monday.

The four-page letter covers territory long of concern to Benedict, but is also heavy on Polish history and John Paul’s personal background, suggesting that the 92-year-old Benedict didn’t write it alone. The letter traces John Paul’s quarter-century pontificate, his encyclicals, devotions and foreign trips, as well as the final moments of his life and the chants of “Santo Subito” or “Sainthood Now” that erupted soon thereafter.

The final part of the letter is dedicated to the question of whether John Paul should be given the title “the Great,” after having already met the Vatican criteria to be declared a saint. Pope Francis canonized him in 2014.

The title is a way to recognize the impact a particular saint had on the church and the world, and is usually considered long after a saint’s death so historians have ample evidence to judge. John Paul’s supporters argue his role in bringing down communism in his native Poland, as well as his guidance of the church in the years after the Second Vatican Council, make him worthy of the title.

Even by the time John Paul was canonized, however, his legacy had been stained by his failure to address clergy sexual abuse, a scandal that has only grown in recent times. In the last year, the Polish church itself has been devastated by its own reckoning with old and new cases of abusive priests and superiors who covered up the crimes.

Benedict’s letter makes no mention of the scandal. Instead, it argues that John Paul belongs in the company of two popes who have been declared “the Great:” the 5th Century Pope Leo I and the 6th century Pope Gregory.

Benedict wrote that in the cases of Leo and Gregory, “the word ’great’ has a political connotation, but precisely because something of the mystery of God himself becomes visible through their political success.

“Undisputedly, the pope’s faith was an essential element in the collapse of the powers,” Benedict wrote of John Paul. “And so, the greatness that appeared in Leo I and Gregory I is certainly also visible here.”

He concluded by saying: “Let us leave open the question of whether the epithet “the great” will prevail or not.” But he stressed that: “It is true that God’s power and goodness have become visible to all of us in John Paul II.”