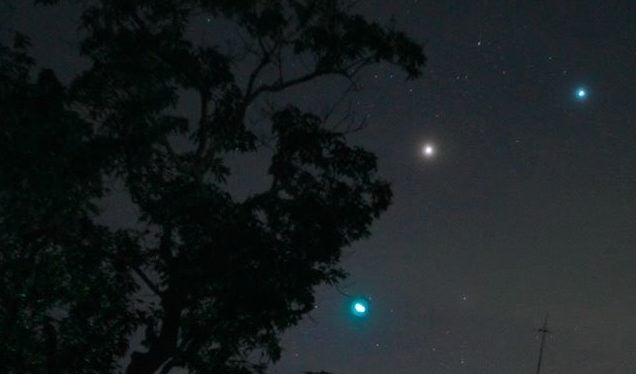 MOALBOAL, CEBU — The Philippine Atmospheric, Geophysical and Astronomical Services Administration (Pagasa) in Mactan may have answers to the “mysterious” lights seen in the sky from Daanbantayan town, northern Cebu.

Netizens were curious about unusual lights in the sky captured and shared by photo enthusiast Jack Ponpon from Daanbantayan town, northern Cebu on Saturday evening, May 16, 2020.

Ponpon captured the strange but beautiful display of lights from Libertad, Bagay, Daanbantayan and shared it on his social media account the day after.

Read: What are these mysterious lights in the sky seen from Daanbantayan, Cebu?

Asked about this, the country’s National Meteorological and Hydrological Services agency said this could be due to planetary conjuction, a phenomenon where planets “align” in the night sky.

Nedz Saletrero – Deflin, weather specialist of Pagasa-Mactan, told CDN Digital that according to their PAGASA astronomy page, a conjuction of planets, Jupiter, Saturn, Mars and Neptune, have been seen lining-up with the waning Moon on May 12 until today, May 18, 2020.

The advisory also revealed that the conjunction of the planets will be observed in the southeastern horizon.

These “mysterious” lights caught the attention of netizens and the residents in the northern town after it was shared by Ponpon.

(Even here in Cebu City, I see [these lights] always since my work is at night time. What could those be?)

(I’ve noticed that for three days, until now, I still don’t know what those are.) /bmjo