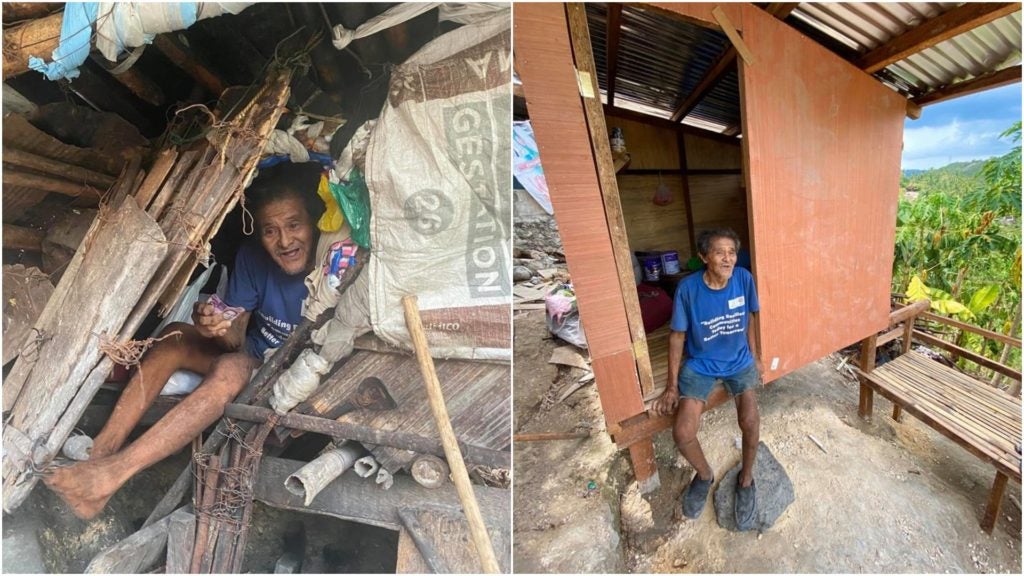 [Left to right] Photos from before and after the renovation of Tatay Melio’s shanty in Sitio Purok 9, Barangay Cadulawan in Minglanilla town. | Photo courtesy of Jay-r de la Calzada

MOALBOAL, Cebu — He used to crawl through his door to get inside his shanty that had sacks of cement and other scrap materials for its wall.

Now, Emelio “Tatay Melio” Ababon enjoys the comfort of his newly renovated shanty that stands on a hill in Sitio Purok 9, Barangay Cadulawan in Minglanilla town in southern Cebu.

Netizen Jay-r de la Calzada said that he and some volunteers visited Tatay Melio’s place on May 15 to help him renovate his home.

Dela Calzada, a resident of Barangay Lipata also in Minglanilla town, said he was deeply touched after he saw a photo of Tatay Melio’s home which another netizen posted on Facebook.

“Naa na ni-tag nako about tatay and my cousin was the one who sent me a message and asked if I can buy Tatay Melio groceries. So from there, I bought stuff for him and went [Facebook] live. Little did I know after ga-live ko, people noticed his balay nga gamay nalang kuwang matumpag na gyud,” he said.

(Someone tagged me [on Facebook] but it was a cousin who sent me a message to ask if I could buy groceries for Tatay Melio. So from there, I bought some stuff for him and went [to visit him on May 14 and it was then that I did Facebook] live.  Little did I know that a lot of people noticed the sorry state of his house which I featured on my Facebook live.)

Determined to help the old man, dela Calzada, 38, said he started to collect cash donations for Tatay Melio which he later on used for the renovation works.

He had also been getting messages from other Minglanilla town residents who also expressed their desire to help Tatay Melio.

“Naka-raised mi og P7,500 then that night. After nag-live ko naa sad nag message nako na group of people na willing to help build his house so na- contact ko sa ako friend who owns a hardware. Then nihatag pud og discount. Then the next day right away we start building his house,” he added.

With the help of some volunteers, they completed renovation works on Saturday, May 16.

(After he saw his new home, Tatay Melio commented that he already felt rich.)

Dela Calzada is appealing for other netizens to also help in Tatay Melio’s other needs.  He said that the old man is alone in his shanty after his only child left him.

He used to earn money by collecting firewood or climbing coconut trees but stopped following an accident.

He said that it would be best to give Tatay Melio groceries because he could barely walk to go the market to buy his food.   It is also difficult to engage in conversation with the old man who could not even remember his age.

Dela Calzada last visited Tatay Melio on Tuesday to send some essentials which he bought using donations that he received from online friends. / dcb