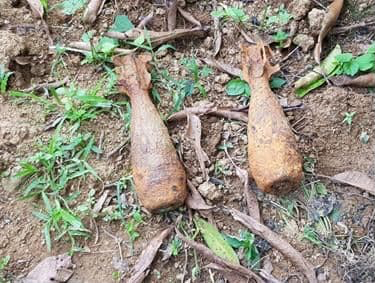 A total of 21 assorted ammunitions, including two World War II bombs, were voluntarily surrendered by several residents in the mountain barangays of Cebu City during a three-day operation against loose firearms and weapons by the City Mobile Force Companion (CMFC) that concluded on Wednesday, May 20. | Photos courtesy of CMFC

A three-day operation against unlicensed weapons and firearms was conducted by the City Mobile Force Companion (CMFC) wherein residents from mountain barangays yielded a total of 21 items to law enforcers.

Of the 21, five were identified as explosives, two of which are Mortar Bombs Shell used in World War II, and three Model 1915 Stielhandgranate.

“The (unexploded explosives) were turned over to EOD (Explosive Ordnance Disposal) K9 for safekeeping and proper disposition,” CMFC said in their report.

The rest were assorted live ammunition, according to CMFC. /bmjo