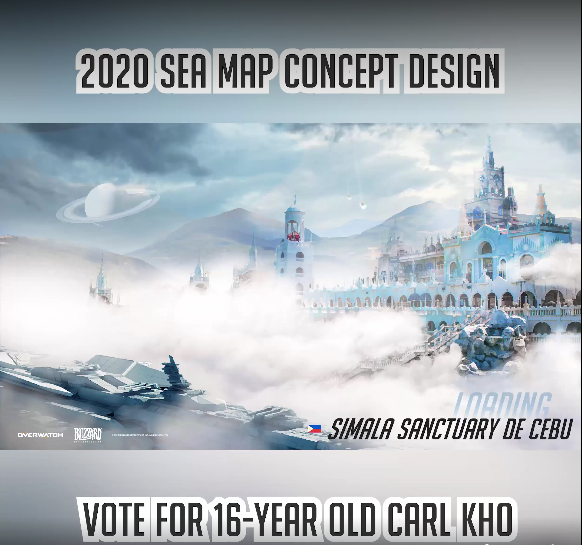 CEBU CITY, Philippines—  A 16-year-old Oponganon is hoping to bring pride to the Philippines as he takes part in international competition, a map design contest, from the company, Blizzard.

Carl Vincent Kho, 16, a senior high school student from Basak, Lapu-Lapu City, is one of the many hopefuls to win in this prestigious international competition called “SEA Overwatch Map Design Contest.”

Kho said he learned about the competition on Facebook and decided to give a shot.

The competition is letting all participants from Thailand, Singapore, Malaysia, Indonesia, Vietnam, and the Philippines create their own dream map for the game, Overwatch.

“Overwatch has always been a game known for its culturally diverse environment. Taking inspiration from characters from multiple places in the world like Zenyatta, a Buddhist from Nepal, Sombra – Dorado, Mexico, and a lot more.  This time, the game would like us, the creative players to create their dream map while maintaining the “Overwatch style”. I am actually hoping to see my map in-game someday,” he said.

He said he worked on his design using the computer for two to three days last April, and he submitted his map concept design entry in mid-April.

He only learned this month that his entry had been accepted for the contest.

On the design, Kho said he had the perfect idea of what his map would look like.

He designed his map with the inspiration coming from the famous shrine in Sitio Lindogon, Barangay Simala in Sibonga, a town in southern Cebu.

“Passing the initial test is already a win as they consider me one that is “good enough,  I am proud to bear the flag of the Philippines and name of Cebu,” he added.

Here’s how you can vote for Kho in the hopes that he will bring home the bacon this coming June 12, 2020 for the awarding ceremony. /dbs