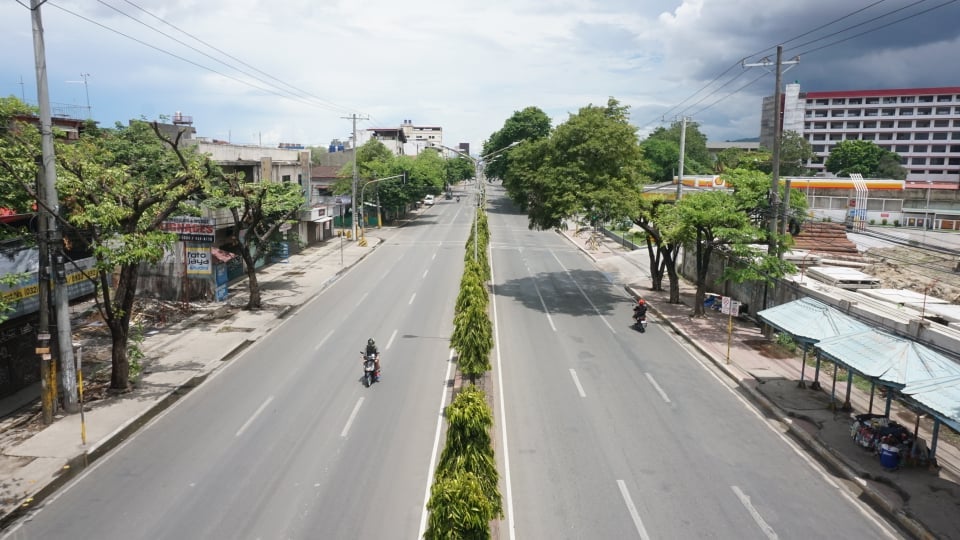 A day before Cebu City’s transition to General Community Quarantine, the N. Bacalso Avenue, one of the longest streets in the city, is quiet on Sunday, May 31, 2020. | CDN Digital Photo Gerard Vincent Francisco

CEBU CITY, Philippines – Before the coronavirus disease 2019 (COVID-19) crisis happened, Van (not his real name) would usually wake up at 7 a.m. to clock-in before 9 a.m. at his workplace in a mall in North Reclamation Area (NRA).

Van, who resides in Barangay Guadalupe in Cebu City, said he was uncertain about how he would take himself to Barangay Mabolo with limited public transportation.

“I am still awaiting a response from our manager about a free shuttle that will supposedly transport us from our houses to work, and vice-versa. Anyway, I will have to wake up early to prepare in case things won’t turn out the way I planned,” Van said in Cebuano.

Hundreds of workers in Cebu City like Van are expected to go out of their houses on Monday, June 1, as the city will transition to a more relaxed general community quarantine (GCQ) that paved way for the reopening of several business establishments.

“I received a message from our manager last Saturday, notifying us that we should return to work by Monday. We haven’t stepped foot in our workplace since March, but we’re fortunate that we continue to receive our salary even if we did not report to duty,” he said.

“But this time, she told us that if we fail to show up, we won’t be paid for the days that we were absent. I know COVID-19 is still there and that’s why I’ll have to take extra precaution at the same time making sure I can work. It’s difficult if you’re going to lose your job in a crisis like this,” he added.

Such precautions included wearing of face masks every time Van goes out of his rented boarding house, on the streets, and at work.

With GCQ, public transportation is expected to return but in a limited capacity only.

READ MORE: LIST: What to expect in areas under GCQ, MGCQ

But according to Eduardo Montealto Jr., director of the Land Transportation Franchising and Regulatory Board in Central Visayas (LTFRB – 7), workers might have to experience ‘slight inconveniences’ on their way to work as authorities still iron out transportation schemes under the ‘new normal’.

Montealto said employees could expect public utility vehicles (PUVs) to start plying the streets in the cities of Cebu and Mandaue this Monday.

However, he added that there could only be a few, and with the need for physical distancing, they might be overwhelmed by the number of passengers needing transportation to report to work.

“Our workers going back to duty tomorrow may face slight inconveniences. We advise those who are eager to return to work but are allowed to do so at their homes to stay. We’re still under GCQ and public transportation will only operate at a limited capacity,” Montealto told CDN in a separate phone interview.

The LTFRB – 7 top official added that they have already come up with 17 PUV routes in Cebu City that covered both main thoroughfares and interior roads.

“But not all PUVs with these routes will be operating at once this Monday. This has to be done gradually so we can make the appropriate adjustments along the way,” explained Montealto in Cebuano.

“And this is not the final number of routes, by the way. We are continually studying and monitoring how this will work out, and definitely there would be changes in the next few days. Maybe, we can add more routes moving forward,” he added.

They added that operators should be issued with special permits before they could go back on the roads.

For Cebu City, Montealto said the PUVs within the 17 routes they had identified would compose a mix of modernized jeepneys and buses.

A standardized fare will also be followed in areas under the ‘new normal’ in which passengers onboard buses, modernized PUJs, and UV vans will pay P11 as minimum fare.

Minimum fare for traditional PUJs is at P9.

But for Van, if he won’t be able to ride a bus or their company shuttle on his first day back to work this Monday, he planned to walk the five-kilometer distance between his boarding house and workplace.

“This is why I will be waking up maybe as early as 5 a.m. so I can start walking without the sun beating down on me. A lot of my colleagues are also planning to do the same,” Van said in Cebuano./ dbs

Read Next
Mandaue to public: Be extra cautious as city goes into GCQ starting June 1