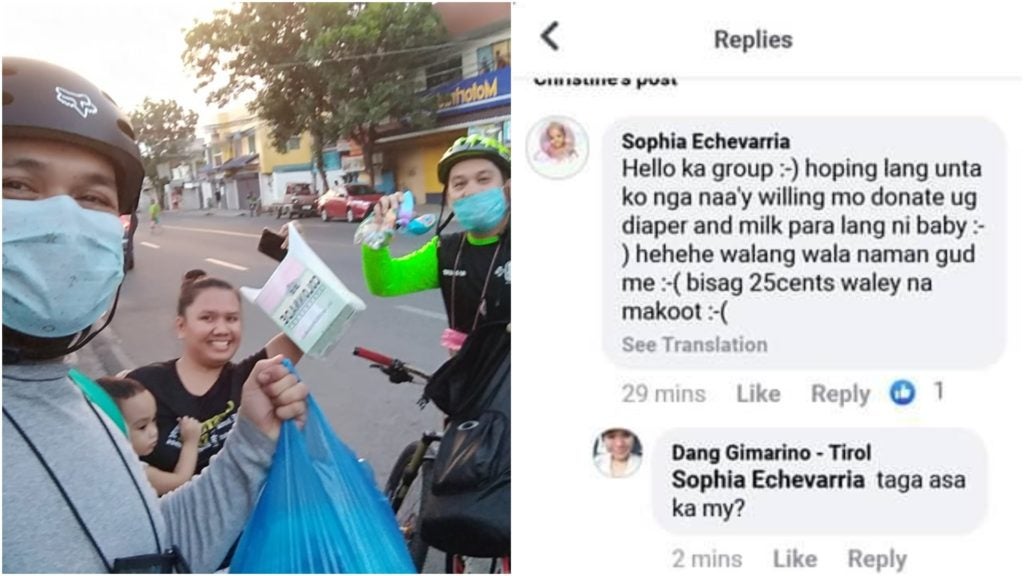 Mommy Cherry Mae Caval shows the stuff she and her friend, Dang Tirol, were able to raise for a mother in need. With her in the photo is Patrick Tirol (in gray), the husband of Dang. | photo courtesy of Dang Tirol

MOALBOAL, CEBU — Dang Tirol was surfing through a famous Facebook barter group for things for her 6-month-old baby when a comment caught her attention.

(Hello group mates. Hoping for someone who is willing to donate diaper and milk for baby. Because we really have nothing, even just 25 cents, we have nothing left.)

The comment was from a fellow mother, Sophia Echevarria, who is a resident of Barangay Kalunasan in Cebu City.

She first shared the story to her close friend, Cherry Mae Caval, who is also a mother herself.

(My heart was crushed when I found out that her baby had no milk. They also didn’t have enough for food. So what I did is I shared the story to mommy Cherry. I sent her the screenshot of the comment and then told her we needed to  help mommy [Sophia.])

And help they did.

Using the Cebu Barter Community, a FB group where netizens from different parts of Cebu exchange goods or services, both were able to raise enough baby essentials for Echevarria through bartering.

Read: A different kind of barter at the Cebu Barter Community

(Without having second thoughts, mommy Cherry looked for some things to barter in the FB group. She bartered her baby stuff in exchange for goods, milk, and diapers.)

Once they had what they needed, they had the essentials delivered to Echevarria on May 27, 2020, with the help of her friend, Genell Baylon, a police officer, who is also living in Barangay Kalunasan.

(I am so thankful for this group (Cebu Barter Community). I hope other netizens are willing to let go of their things [to help others] because some of them want to barter things that have the same price of their items.)

Meanwhile, in an interview with CDN Digital, the 26-year-old Echevarria expressed her gratitude to mommies Caval and Tirol.

(I am very grateful and I couldn’t express my feelings on the blessing we received because I didn’t expect that there would be people who would be willing to help us.)

Echevarria added that the daily essentials she received from Caval and Tirol were a big help for them, especially since her husband, Jonel, a motorcycle-for-hire driver, has a tough time earning money while under quarantine due to the coronavirus crisis.

She said she is also active in the Cebu Barter Community since she could offer cleaning or laundry services in exchange of her family’s daily needs. /bmjo