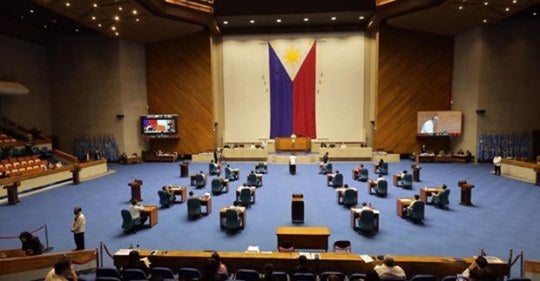 MANILA, Philippines — Human rights groups and opposition lawmakers on Tuesday made a desperate call to Congress not to approve the proposed Anti-Terrorism Act of 2020, warning that the measure aimed at crushing terrorism could easily be abused to crackdown on dissent and constrict the democratic space in the country.

President Rodrigo Duterte on Monday certified the bill as urgent, a signal for its immediate passage by the administration-dominated Congress.

Critics questioned the rush to pass the antiterror bill while the country was dealing with the more pressing national health emergency caused by the COVID-19 pandemic.

In a statement, Lagman said the bill purports to “tighten the noose on suspected terrorists at the expense of the protection of human rights and civil liberties like critical dissent and expression of grievances.”

The measure also allows detention of suspected terrorists for up to 24 days without charges, instead of three days under current laws.

It will also authorize the Anti-Money Laundering Council to pry into the bank accounts of suspected terrorist groups and persons without a specific court order and freeze those accounts for 20 days.

According to Lagman, the bill “encourages, facilitates and legalizes” Red-tagging of groups and persons belonging to suspected terrorist organizations.

The International Coalition of Human Rights in the Philippines (ICHRP) warned of an “all-out escalation of rights abuses” once the antiterrorism bill becomes law.

The ICHRP said the bill was another way for Mr. Duterte to “institutionalize the war against dissent” even without the formal declaration of nationwide martial law.

“This terror bill, if signed into law, is a rubber stamp to already undeclared military rule and will only legalize the targeting of critics and civilians,” the ICHRP said in a statement.

It said the proposed law could lead to violations of people’s right to security and privacy, freedom of expression, freedom of association and the right to due process.

‘Activism not a crime’

“The terror bill erodes the freedoms and liberties of Filipinos which are inalienable, guaranteed by their Constitution, and the Universal Declaration of Human Rights and other internationally agreed-upon instruments to which the Philippines is a signatory,” the group said.

Lea Guerrero, Greenpeace Philippines director, said “activism is not a crime” and the people were not enemies of the government but its partners in nation-building.

“Empowered participation and collective citizen action in political discourse, including in opposing harmful government policies and business practices, are vital in protecting the health and well-being of Filipinos and the environment on which we depend,” she said.

The measure will replace the Human Security Act of 2007, which Sen. Panfilo Lacson called a “dead letter law” because the military and police had “refused” to use it against terror suspects due to a provision that gives a compensation of P500,000 per day of detention to an accused who is acquitted. “Instead, they opted to file simple violations of the (Revised Penal Code) like murder, illegal possession of explosives, illegal possession of firearms, etc.,” Lacson said.

“There are no draconian provisions there. All provisions are based on laws of other countries which are more effective in combating terrorism,” he said. Senate President Vicente Sotto III said “terrorists or their supporters are the only ones who will be afraid of the bill.”

“It’s as good as passed,” he said. “It will just need my signature if it comes back to us after ratification (of the bicameral committee) then I will transmit it to the President.”

Sen. Risa Hontiveros and Sen. Francis Pangilinan were the only senators who voted against the bill.

Pangilinan believed that the measure was “open to abuse.”

“This is one compelling reason why I voted against it,” he said.

“The concerns being raised by the progressive and leftist groups, as well as human rights advocates, have been adequately addressed during the (Senate) hearings,” he said.

He said that under the proposed law, an Anti-Terror Council, which includes the secretaries of defense, the interior and the national security adviser, could “designate” any person or entity as a terrorist or a terrorist group.

But the measure had no provision where the person or group could present “countervailing evidence” or have a hearing, or prior notice, which are violations of the Bill of Rights in the Constitution, Sta. Maria said.

“The Constitution provides that no law shall be enacted depriving any person of his life, liberty and property without due process of law,” he added.

He said the bill will give any president would be given “enormous executive power, which, if abused, can lead to the weaponizing of the law to create fear even among legitimate critics.”

“Indeed, the availability of such executive power provides a tempting invitation for its misuse and abuse, a lure for which manipulative government officials may not be able to resist. If only for this reason, the antiterror bill should never be passed,” he said. “The bill, if passed into law, will be any despot’s deadly sword.” —WITH REPORTS FROM MARLON RAMOS, MELVIN GASCON, LEILA B. SALAVERRIA, JHESSET O. ENANO AND MARIEJO S. RAMOS