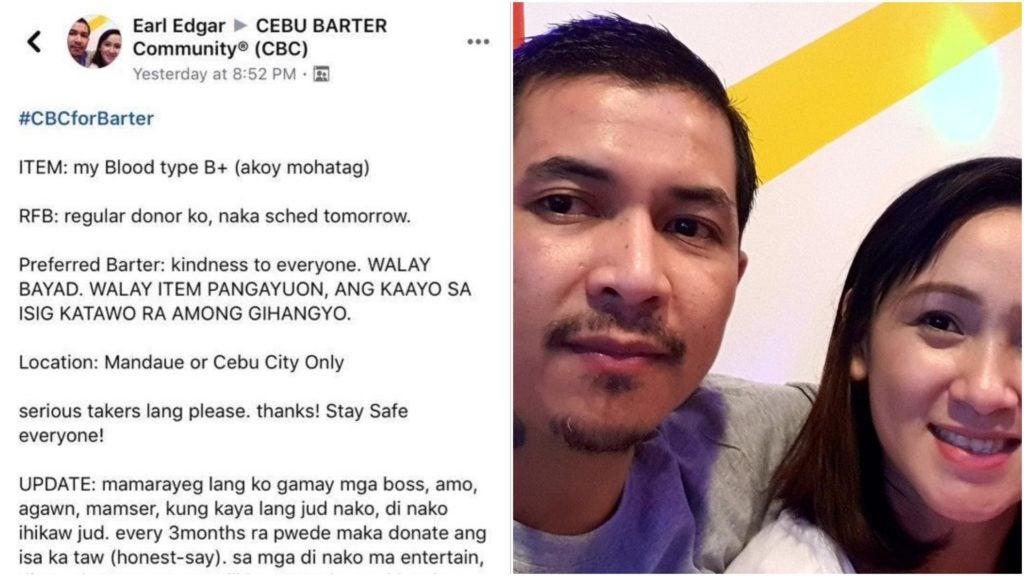 Photo of Earl Edgar Nisnisan together with his wife, Lora Gabiana. | photo contributed

MOALBOAL, Cebu — A netizen from Talisay City is offering a different kind of barter – his blood in exchange for an act of kindness.

Earl Edgar Nisnisan, 35, said he wanted to share his precious blood to save lives.  At the same time,  he also wanted to correct misconceptions against blood donations and encourage more Cebuanos to share their blood with others.

In exchange, he wanted the recipients of his blood to share an act of kindness to others.

Nisnisam posted on the Cebu Barter Community Facebook page on May 31 that he was willing to make a donation of his blood to anyone who would need it.

Nisnisan has a B+ blood type.

(ITEM: my Blood type B+; Reason for Barter (RFB): I am a regular donor, I was scheduled tomorrow; Preferred Barter: Kindness to everyone; No fee. I won’t ask for any item in exchange. I just want kindness from everyone; Location: Mandaue or Cebu City only.)

After posting his status on the barter group, over 500 individuals coming from different parts of Cebu expressed their need for blood donation.

(I have been having goosebumps since last night because I wasn’t expecting that many people would respond to my offer. I was even in a panic to reply to all the messages that I received and I felt pity for them. They shared their different stories with the same emotions involved.)

But because he couldn’t cater to all the requests that he received, Nisnisan picked just one recipient – a mother from Barangay Capitol Site in Cebu City, who was due to give birth anytime.  He visited the woman at the hospital where she was admitted on June 1 to donate blood.

As for the others, he advised them to join different blood donation groups, where he is also a part of, so that they could establish contact with other blood donors.

Nisnisan, a vape shop owner, started to donate blood in 2001 after he became part of the Red Cross Youth.

He became a regular blood donor in 2015.  He has made it a personnel commitment to donate blood after his father, Edgar, died at age 54.

(My father died of an aneurysm. Until now, It pains me to remember that I wasn’t there for him while he was fighting for his life. That’s why as much as possible, I wanted to donate my blood for free because this was also given to me by God for free.)

Nisnisan said that he also empathizes with the sufferings of those who are caring for their sick family members.

(I don’t like seeing the family of the patients struggle because I have seen that in my mother before. Aside from mourning, there are also hospital bills that will have to be paid.)

(That is very wrong. You just need to rest your system for 18 months, you cannot have any new tattoos, then you are already qualified to donate your blood.)

Nisnisan said he plans to make another blood donation in October 2020 or three months after his last donation on June 1.

He is also asking other Cebuanos to share their precious blood especially during times of crisis.

“Di angay mahadlok sa pag donate. “What goes around comes around”…Kas-a ra ta mabuhi anj g kalibutana, might as well make it useful to our love ones and to others, specially sa mga nangailangan,” he said.

“Never be afraid of donating [your blood]. What goes around comes around. We only live in this world once, we must make life useful to our loved ones and to others especially those who are in need.” / dcb