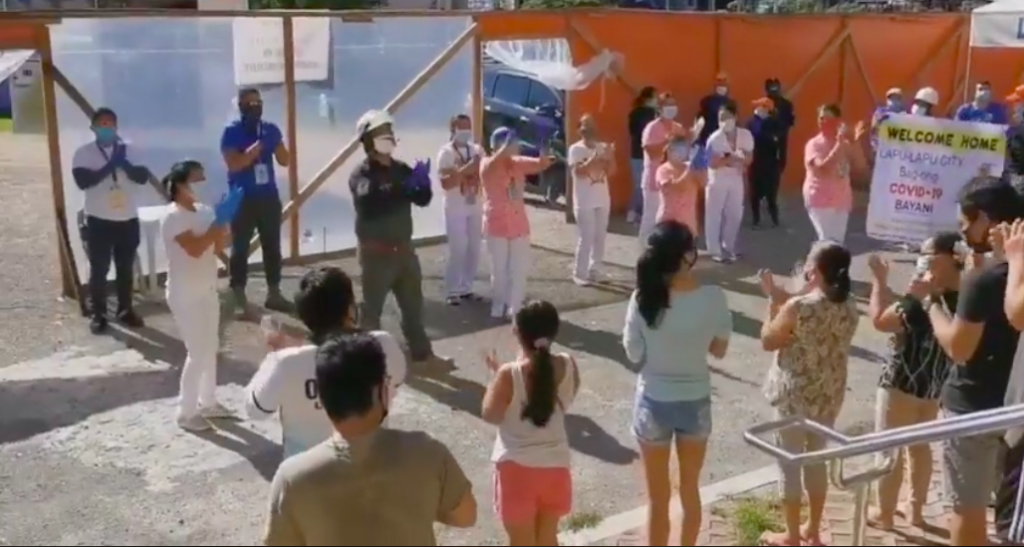 Screengrabbed from the live video of the releasing of 17 new recoveries from Lapu-Lapu City Saturday, afternoon June 20, 2020.

Five of those released were the last five COVID patients from Sitio Sta. Maria in Barangay Pusok and their release meant that they were the last COVID patients to recover from the area, said Nagiel Bañaca, Lapu-Lapu City Disaster Risk Reduction and Management Office chief in a phone interview.

“All patients from Sta. Maria have gone home. We initially won the war in Sta. Maria,” said Bañacia.

Aside from the five patients released from Sitio Sta. Maria, seven of those who recovered are from Barangay Buaya, Zone 2; while Barangays Ibo, Seaside; Mactan; Ibabao; Agus; Babag; and La Aldea, Timpolok have 1 recovery each.

All the recovered patients were released from the Lapu-Lapu City Isolation Facility this afternoon and they were warmly welcomed by the DRRMO personnel and health workers.

Mayor Junard Chan shared this event on his Facebook page as well as he said a few words to encourage Oponganons especially the frontline workers of the city.

(This success would not have been made possible if it were not for our frontliners, who took care of the asymptomatic patients in our isolation facilities.)/dbs

Read Next
Tax amnesty on delinquencies extended to Dec 31