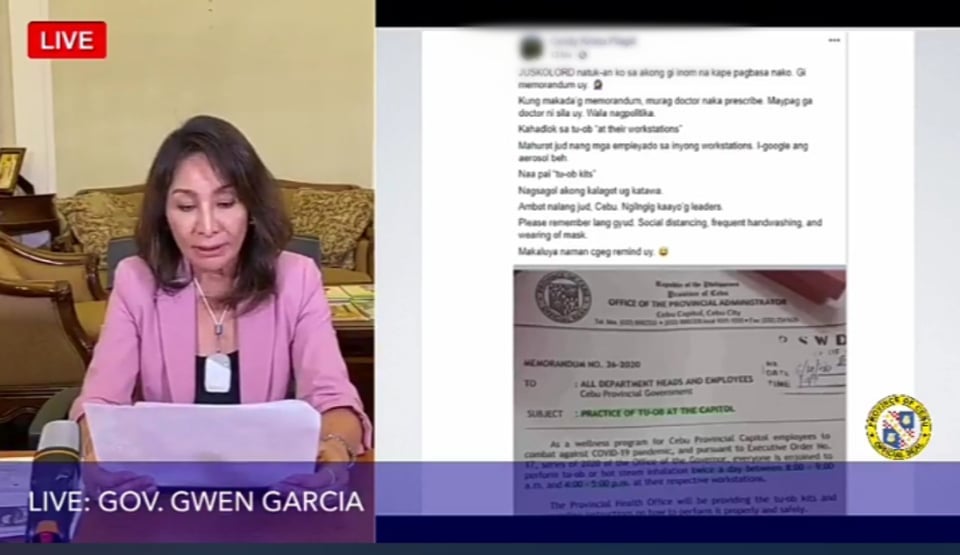 Governor Gwendolyn Garcia called out two “young” doctors who gave unfavorable remarks on the traditional steam inhalation or “tuob.” Garcia also took the remarks of one of the doctors saying “basin ganahan ni siya masagpaan” (maybe she wants to be slapped) as a threat against her. | Screengrab from the virtual press conference.

This after the governor, in a Facebook Live presser, called out two young doctors who posted unfavorable remarks about “tuob” or steam inhalation as a means of alleviating symptoms of  COVID-19, a practice that Garcia promotes.

Following the presser, the Netizens took to twitter their opinions on the governor’s remarks. Over 10,000 tweets mentioned Garcia and the tag #NoToDoctorShaming as of 3 p.m. on Wednesday.

The first doctor posted a photo of a memorandum to Capitol employees issued by the Provincial Administrator’s Office which “enjoins” the employees to practice tuob twice a day. The memo sent out last June 18 said the order was “for strict compliance,” but Garcia said she will have it amended to reflect that practicing tuob is only voluntary.

The doctor, on her post, expressed frustration on the memorandum, which she said seemed like a prescription, and said practicing tuob on their workstations may be harmful because of possible aerosolization of the virus.

She also reminded the public that the ways to combat the coronavirus disease are the practices of social distancing, frequent hand washing, and wearing of masks.

Garcia, during her presser, broadcasted the screen captures of the doctor’s post, her pictures, and background, which says that the latter is a general practitioner in a private hospital in Mandaue City. The broadcast also named the doctor’s relatives, including her father, a private company doctor, and uncle, who is a councilor in Balamban.

The governor also pointed out that the doctor has been practicing for two years, as compared to the Provincial Health Officer who is in the practice for over 30 years and hydrotherapy enthusiast Dr. Dale Pasco, whom she invited on her June 22 presser to discuss about tuob and its possible alleviating effects on COVID symptoms.

Garcia clarified that practicing tuob is only for those who would want to and is a privilege for the Capitol employees as the Capitol will not be charging them for the tuob kits that will be placed in their offices and for the 10 to 20 minutes that they will spend while doing the regimen.

Another netizen also wrote: “Can someone tell GOVERNOR Gwen Garcia that instead of publicly shaming those who criticize her admin’s decisions, try listening to what they have to say: The reasons behind their rants, the suggestions that they could give, etc.”

“I just pray that whatever Gwen Garcia said did not discourage our medical frontliners [sad emoji] You guys are fighting the real fight for the Filipino people! Salamat!” said another tweet.

Garcia also called out another doctor who supposedly posted “threats” against her for issuing the memorandum.

(Maybe she wants to get a slap. I am already tired of risking my life while attending to these positive patients and then there are things like this. Perhaps you want me to set you on fire so you would be cremated.)

Garcia said the statement of the second doctor was “unethical” and suggesting ending lives instead of saving them. She also challenged the doctor to come forward and slap her.

“Kaning imong term, ‘maayo ninyo pangdaoban aron diretso mog cremate,’ you will account for this. Manubag ka ani. I will file a complaint against you to the proper authorities,” said Garcia.

(What you said, “it’s better to set you on fire so you’ll be directly cremated,” you will account for this. You will answer to this.I will file a complaint against you to the proper authorities.)

While Garcia said she salutes all medical frontliners who are at the forefront of the battle against COVID-19, she said said that it is not only the medical practitioners who are exerting efforts amid this  pandemic. /bmjo

Read Next
Chan on recovery from Covid: It’s a new life, new beginning