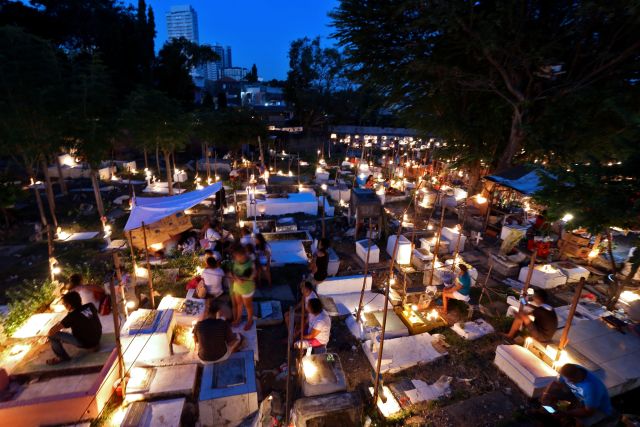 Cebuanos crowd the Carreta Cemetery during the All Saints’ and All Souls’ Day celebrations to visit their departed loved ones.  | CDN File Photo

CEBU CITY, Philippines –Aside from taking care of their medical bills, families of COVID-19 patients are also faced with a problem on where to bury their deceased family members.

Cebu City Councilor Dave Tumulak said that most of the cemeteries in the city, both private and public, are now fully occupied because of the spike in deaths related to the coronavirus disease.

He said that even crematoriums here are already accommodating beyond their respective capacities, the reason why other dead bodies will have to be placed in storage facilities for at least two days while it awaits its scheduled cremation.

The Inter-Agency Task Force for the Management of Emerging Infectious Diseases (IATF-MEID) would have wanted COVID-19 fatalities cremated within 24-hours.

“The IATF said that COVID-19 related deaths should be cremated, but reports from our crematoriums reveal that there is an influx of clients,” said Tumulak, head of the City Council’s committee on disaster risk reduction and management.

Tumulak is proposing for the establishment of a city-run cemetery here to especially accommodate the COVID-19 victims.  His suggestion was contained in a resolution which the City Council passed during their June 27 session.  But this will still need the concurrence of Mayor Edgar Labella prior to is implementation.

He is also urging Labella to invest on a cremation machine or build a crematorium here.

As of Monday, June 29, Cebu City already logged a total of 169 COVID-related deaths.  Of these, 80 were recorded in the month of June.

(Not all families can afford the cost of cremation.  An ordinary burial is still a cheaper option for cremation.  Cemeteries are now full because of the spike in recent deaths.  We now need a new cemetery.)

But many of the Cebuanos are forced to opt for the more expensive cremation because of the overcrowding in most of the city’s  11 private and 15 public cemeteries.

Tumulak is asking Cebuanos to be a little more patient with the city government while they try to establish a new public cemetery.

He said that the Department of General Services (DGS) is still in the process of finding a space that may be used for the needed cemetery. / dcb