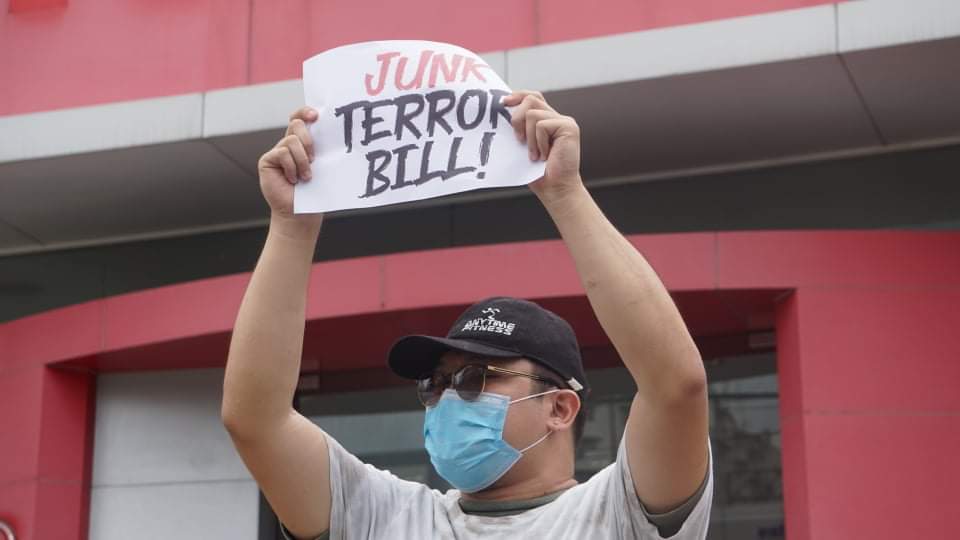 A protester in Cebu City holds up a “junk terror bill” sign during a rally along Gorordo Avenue on Friday, June 12, 2020, the day that the country commemorated its 122nd Independence Day. CDN Digital photo | Gerard Vincent Francisco

CEBU CITY, Philippines — Another progressive group has joined the call against the passage of the proposed Anti-Terrorism Bill, which now awaits President Duterte’s signature, calling the proposed law “patently unconstitutional and repressive of the participation rights of children.”

While the ATB, which was passed in the Senate and the Lower House, is aimed at preventing terrorism activities in the country, the Children’s Legal Bureau (CLB) said that the legislation will only “exacerbate” the problem with its definition of terrorism.

“The proposed definition of terrorism practically restrains legally sanctioned activities directed against the government and its policies such as rallies, demonstrations, workers’ strikes, and even trainings and seminars to educate and enlighten the people about issues that oppress them,” the CLB said in a statement issued on June 30, 2020.

“The Anti-Terrorism Bill, if approved into law, will create an environment of paranoia and restraint due to the fear of being unjustly accused of being a terrorist. The Bill does not promote child development, and at most, repressive towards children and the entire citizenry,” the CLB said.

While government allies repeatedly say the ATB is made for terrorists and not for activists, the group cited the incident earlier this month when Overseas Workers Welfare Office (OWWA) Deputy Administrator Mocha Uson supposedly labeled a group of activists as terrorists in a tweet.

“Some law enforcement agents even consider rallies as recruitment activities for the New People’s Army (NPA). Considering these instances of “red-tagging” organizations that are critical to the government, there is a legitimate reason to worry,” the CLB said.

In its statement signed by CLB Deputy Executive Director, lawyer Noemi Truya-Abarientos, and Communications and Advocacy Officer, lawyer King Anthony Perez, the group added that the provisions of the ATB run contrary to the 1987 constitution.

“The supreme law of the land respects a person’s right to form associations, peaceably assemble, and petition the government for redress of grievances. These well-enshrined constitutional rights may be curtailed once the Bill becomes law by approval or inaction of President Rodrigo Duterte,” the CLB explained.

Under the 1987 Constitution, law enforcers are required to file charges against a person within three days from arrest or detention, even when the suspension of the privilege of the writ of habeas corpus, as a measure against warrantless arrest.

“But in the proposed ATB, Section 29 of the Bill provides for the detention without a judicial warrant, which runs afoul to the constitutional prohibition against arbitrary arrest and detention,” said the CLB.

The group also pointed out that through the provision, it would be the Anti-Terrorism Council that would determine who may be arrested and be taken into custody, when the determination of valid arrest and detention is “purely a judicial function.”

“Sanctioning an excessive number of days of detention and arrest without a judicial warrant will certainly fail the test of constitutionality,” the CLB said.

“As an advocate for the participation rights of children, CLB fears that the Bill will create a negative impact in the delivery of services to children and in our efforts to organize the youth to make use of their rights to empower and prepare them in becoming active and responsible members of the community,” CLB added. / dcb