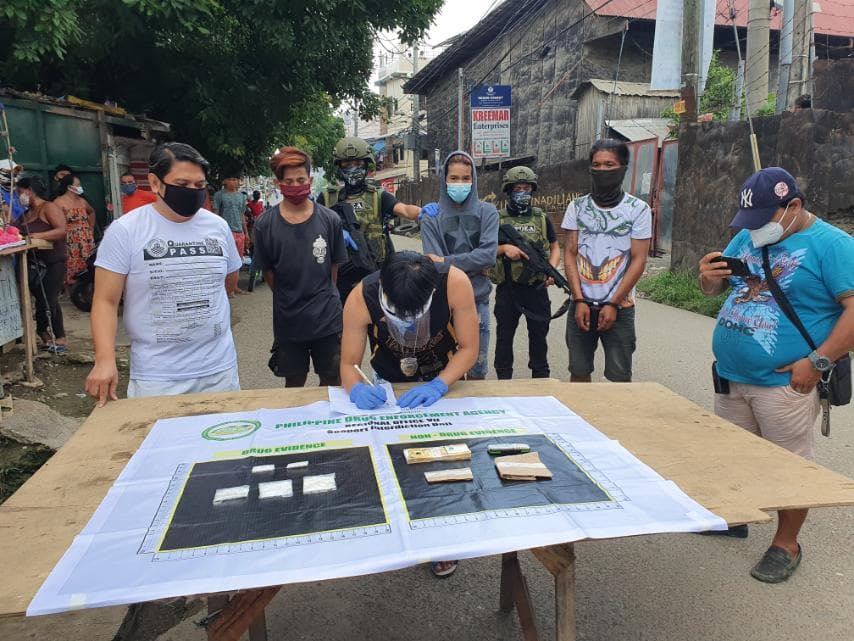 A 35-year-old man, considered as a high value target or an HVT, is arrested and two minors were rescued by the Philippine Drug Enforcement Agency in Central Visayas (PDEA-7) in drug bust operation in Sitio Tahna, Barangay Tisa, Cebu City ata around 3:30 p.m., today, July 5, 2020. | Photo Courtesy of PDEA-7

CEBU CITY, Philippines — A 35-year-old carpenter was arrested while two 16-year-old boys were “rescued” by the Philippine Drug Enforcement Agency in Central Visayas (PDEA-7) during a buy-bust operation in Sitio Tahna, Barangay Tisa, here, at around 3:30 p.m. this Sunday, July 5, 2020.

Confiscated from Ermitanio were at least 85 grams of suspected shabu with a worth of P578,000.

According to PDEA-7 spokesperson Leia Albiar, Ermitanio could dispose up to a a kilo of illegal drugs every week.

She said that the information about the illegal activities of Ermitanio came from a confidential informant.

Upon further information, it was found out that the two minors served as the first to transact to the costumers of Ermitanio.

The two minors were turned over to the Department of Social Welfare and Development (DSWD) for assessment while Ermitanio was being held at the detention facility of PDEA-7 in Sudlon, Baranagy Lahug, Cebu City.

A case for violation of section 5 or the selling of dangerous drugs, section 11 or the possession of dangerous drugs and section 26 or conspiracy, under Article II of Republic Act 9165 of the Dangerous Drugs Act, will be filed against the suspect.

The operation against Ermitanio happened a day after the Cebu Police Provincial Office Provincial Drug Enforcement Unit arrested two brothers who had expanded their operations from Consolacion to Mandaue City, Liloan and Compostela.

The siblings were also caught with 22 grams of suspected shabu with an estimated Dangerous Drugs Board of P204,000 during a buy-bust operation in Barangay Tayud, Consolacion, a town in northern Cebu../dbs