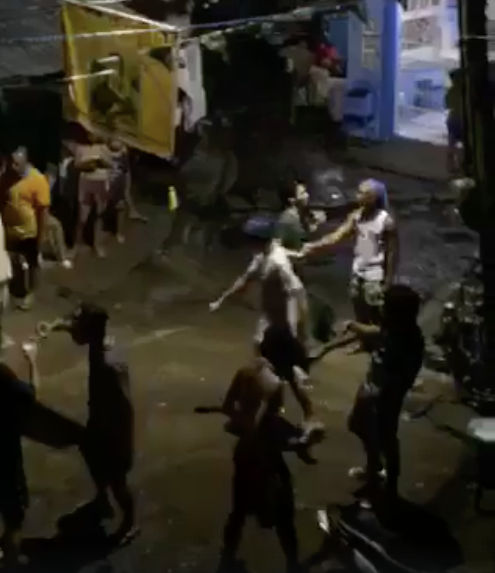 In this screenshot from a video posted by Skydancer Jill Bonch, some men are seen gathering outside their residences in A. Lopez  Barangay Calamba, Cebu City, on June 28, 2020, to celebrate their fiesta through drinking sessions.

CEBU CITY, Philippines — The Cebu City Legal Office (CLO) has found grounds of dereliction of duty for the officials of Barangay Calamba following the “disco” that occurred in one of the sitios on June 27, 2020.

In the report released by the CLO, City Legal Officer Rey Gealon said that the barangay officials were aware that a Novena Mass was being held in the chapel of the sitio for the fiesta celebration based on their response to the show-cause order.

They allowed the masses to continue to gather despite the strict guideline of “no religious gatherings” under the enhanced community quarantine (ECQ) even if the Mass was done with respect to social distancing.

As the barangay officials know that Masses were held in the chapel, this already constitutes a neglect of their duty to ensure that no such event should occur in the barangay.

Furthermore, Gealon said that the barangay lacked sufficient checkpoints and patrols that might have prevented such an incident from happening.

Barangay Councilor Renante Bendol was singled out by Captain Quijano for failing to report the incident despite living nearby, but the CLO said the same should be said of the other councilors who might be living nearby as well because the sound of the disco could be heard from a considerable distance.

With these, the CLO has recommended a dereliction of duty for the barangay officials.

Three other councilors including Wilfredo Gonzaga, Corazon Lim, and Renante Bendol have yet to answer the show-cause order of CLO and have not yet been included in the report.

Gealon said the findings had already been forwarded to the Department fo Interior and Local Government in Central Visayas (DILG-7), which has taken over the case.

The Calamba officials have yet to comment on these findings. /dbs