MANILA, Philippines — A Malacañang official on Saturday appealed for understanding as thousands of people waiting for rides out of Metro Manila were brought en masse to Rizal Memorial Sports Complex over the weekend, after their photos on social media elicited rage and pity from netizens who noted how authorities packed them in apparently without enforcing social distancing.

Assistant Secretary Joseph Encabo of the Presidential Management Staff said this latest batch of locally stranded individuals (LSIs) was brought to the stadium to provide them with a more comfortable place to stay instead of letting them wait in the streets.

Encabo spoke as the lead convenor of “Hatid Tulong,” a transport assistance program for LSIs run by the Department of the Interior and Local Government (DILG). The agency on Friday said about 8,000 travelers were set to leave the national capital for the provinces with the help of the program.

Photos of thousands of LSIs seated close together in the stadium bleachers drew criticism on social media, with netizens noting that many of them were not even wearing protective masks.

“We know that if ever we violated the issue of social distancing, we also need to show sympathy and understanding and care for our fellow Filipinos so that they could wait comfortably for their trips [back home],” Encabo said.

“We hope the public understands that what the Hatid Tulong Technical Working Group did was a decision, a collective decision, to provide order and proper temporary shelter while they are waiting for their [return] home,” he added.

Reached for comment, Interior Secretary Eduardo Año said “many LSIs wanted to avail [themselves of] the Hatid Tulong Program and they’re quite stubborn (“matigas ang ulo”) because they’re afraid they might not be accommodated. We will employ more marshals [to enforce social distancing] next time.”

Año said he had ordered the Philippine National Police to strictly enforce COVID-19 protocols in the stadium.

“The PNP and other marshals are now segregating the LSIs to impose physical distancing. Wearing of mask is a must,” he said. 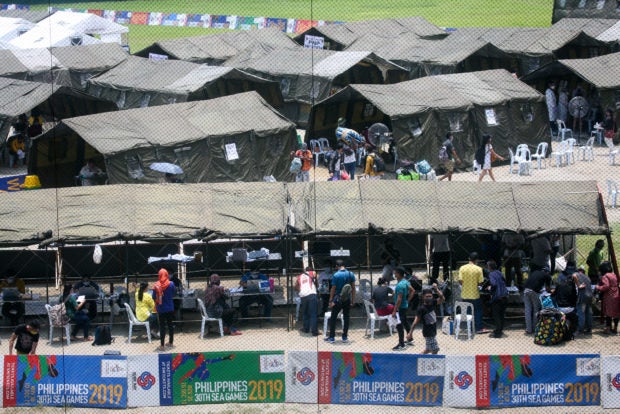 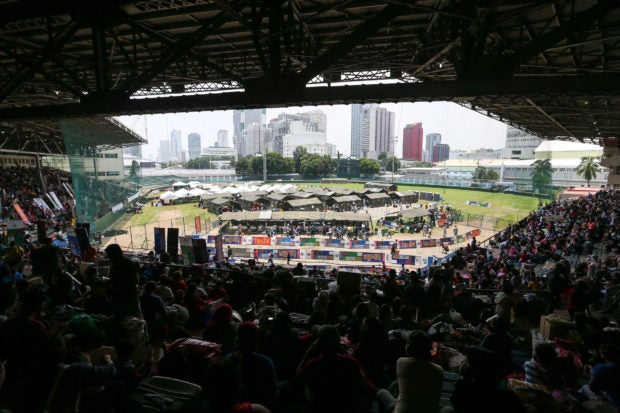 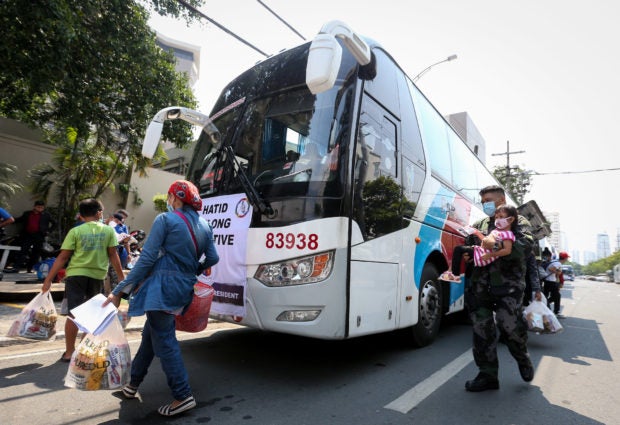 LONG WAY HOME Some of the stranded travelers at Rizal Memorial Sports Complex wait for rides that will take them to their home provinces. Top photo shows a group bound for Region 11 (Davao Region) who has been called to line up for rapid testing before being allowed to board buses taking them to a ship headed for Cagayan de Oro. Middle photo shows the tents for each procedure that the travelers must undergo. Photo above shows a member of the Philippine Coast Guard carrying a child to a bus ready to transport some of the passengers. —LYN RILLON

According to Encabo, the stranded travelers had already undergone medical examination as well as rapid testing for the new coronavirus disease (COVID-19).

Passengers testing negative would would be able to secure a travel authority to return to their home provinces, he said.

Those testing positive would be placed in an isolation center, this time for swab testing.

Encabo said they would only be allowed to travel if they test negative.

“What’s important is they are back with their families and secured, and would no longer need to suffer in Metro Manila,” Encabo said.

The DILG has instructed local governments to accept returning residents, emphasizing that they will have undergone rapid testing and will bring with them medical certificates and travel authorities.

The department’s spokesperson, Interior Undersecretary Jonathan Malaya, said the returnees would again go into quarantine as well as swab testing upon reaching their destinations.

Malaya said the DILG would try to send home all stranded travelers at the Rizal stadium this weekend.

“If we have more [who] can’t be accommodated today and tomorrow, we will schedule another batch,” he said.

Año earlier said the latest batch of LSIs assisted by Hatid Tulong would be boarding a total of 120 buses and five sea vessels, as well as trains of the Philippine National Railways.