Barcenas: Petitions vs Anti-Terror Law have ‘high’ chances in SC 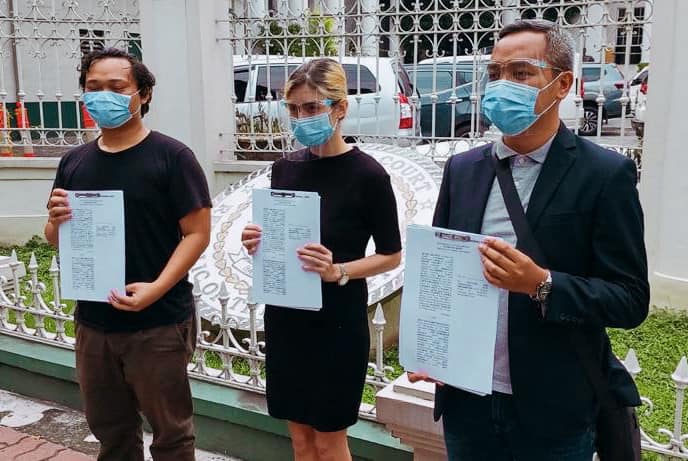 Cebu students organizations assisted by FLAG Cebu file the 20th petition challenging the constitutionality of the Anti-Terror Act of 2020. This is the first petition coming from outside of Metro Manila. (Photo courtesy of Cebu Against Terror Law Facebook page)

This is despite that the majority of the 15-member tribunal are appointees of President Rodrigo Duterte, who supports the passage of the bill.

Barcenas said lawyers, including non-members of FLAG, headed by lawyer Abe Acosta helped in the preparation of the petition and act as counsels of the all-Cebuano petitioner.

The Cebuano students’ petition is the first and the only one so far coming from outside of Metro Manila.

The 70-page petition also calls for the High Court to issue a Temporary Restraining Order (TEO) to halt the implementation of the law pending the resolution of the petitions challenging its validity.

“There is clearly a pressing and urgent necessity for a TEO and/or injunctive relief to enjoin the respondent members of the Anti-Terrorism Council from implementing the ATA as the same threatens to undermine the basic civil and political liberties guaranteed by the Constitution,” the petition reads.

In an interview with CDN Digital, Barcenas said he was still confident that the justices of the SC would listen to the arguments of the dissenters and uphold the rule of law.

(Aside from their being smart, they are people of integrity. I believe that these Supreme Court justices, even though they were appointed by Duterte, they will still hear the explanation so that they can uphold the rule of law.)

Barcenas reiterated their position that there were provisions of the ATA that ran contrary to the 1987 Constitution itself, particularly on the policy on the arrest of individuals.

The ATA, which was signed by President Duterte early this July, is now being questioned by multiple groups, including Retired Supreme Court justices Antonio Carpio and Conchita Carpio Morales./dbs