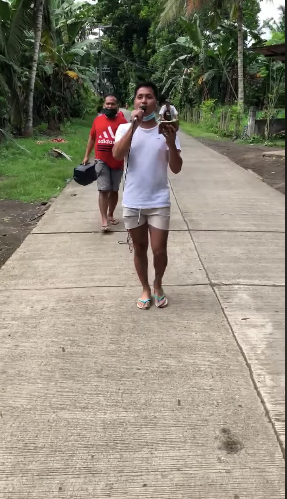 Steven Colcol with his friends during their “Kalsadao-oke” in Labo, Ozamiz City.

CEBU CITY, Philippines— Want to be entertained with some karaoke hits at home?

Worry not, because this 28-year-old from Labo, Ozamiz City has got you covered.

Steven Colcol, a restaurant host on a cruise ship, gave his own take to one of the Filipino’s favorite pastime, karaoke.

Colcol’s version is quite the same but with a twist, you have to walk around carrying a speaker with a microphone.

Which he dubbed as “Kalsada-oke.”

WATCH: Want to be entertained while at the comforts of your homes? Try watching “Kalsada-oke” by Steven Colcol of Labo, Ozamiz City. The 28-year old Colcol, who works as a restaurant host for a cruise ship, decided to entertain their neighbors with his own take of Beyoncé’s Listen. He uploaded the video last July 30 on his Facebook account. | Immae Lachica #CDNDigital

“It all started when my friends and I were doing the usual karaoke at home. Then we decided to do a twist and bring the karaoke to the streets in our community,” he said.

He was joined by two of his friends Bodie Bingkat and Erwin Ongcoy when they decided to film his Kalsada-oke last July 30.

After just hours from uploading the video, Colcol’s video has gained so much attention that as of August 1, the video has already gained 1.3 million views with 22,00o shares.

“We didn’t really expect it to go viral. We just wanted to have fun and spread it in our community and online,” he added.

Any, challengers here in Cebu? We’ll be waiting. /dbs

By: PR
Faces of Cebu Life!

By: Dianne Zarina G. Savillo, Isabella Angan, Rhobie Alburo Ruaya
read more
TAGS: kaslada-oke, Philippines, trending
Latest Stories
When was the last time you had masareal?
Palawan Pawnshop unveils PalawanPay, an e-wallet designed for the needs of the Filipinos
Cebu Exchange set to welcome more occupants
Zion Gutierrez excited to get back to school
Experience greater heights with Worldwide Central Properties Inc.
Most Read
Fernandez: 3rd place finish still doable if we work together
Cebuano dancesport duo: ‘We are very honored to once again represent our country’
Former Rep. Martinez, 7 others convicted of graft, malversation of funds
Barbie Imperial embraces stretch marks with pride and fans are loving it
Netizens offer prayers and words of encouragement for Kris Aquino via tweets