PRO-7 to intensify inspection of warehouses with explosives 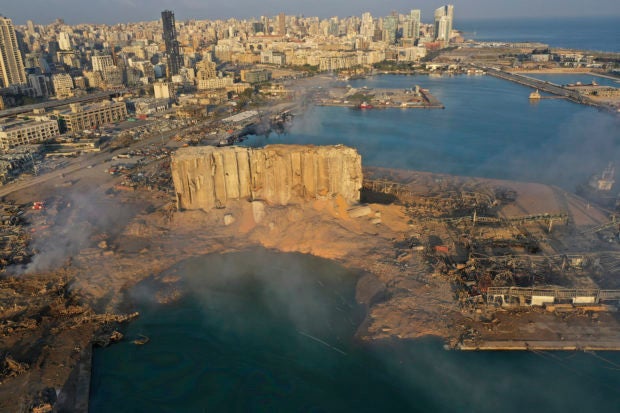 A drone picture shows the scene of an explosion that hit the seaport of Beirut, Lebanon, Wednesday, Aug. 5, 2020. A massive explosion rocked Beirut on Tuesday, flattening much of the city’s port, damaging buildings across the capital and sending a giant mushroom cloud into the sky. | AP Photo/Hussein Malla

CEBU CITY, Philippines – Police in Central Visayas will be intensifying its monitoring and inspections on warehouses and other establishments storing explosives.

This was in response to the recommendations made by Cebu 3rd District Representative Pablo John Garcia following the explosion that rocked the Lebanese capital of Beirut on August 4, 2020 (Philippine Standard Time) that claimed the lives of at least 100 individuals and injured thousands.

Ferro told reporters in a teleconference on Thursday, August 6, that he has instructed officers in charge of ammunitions to ensure that explosives and their initiators must be separated while being stored.

“We will be directing the Regional Civil Security Group Unit to intensify their regular monitoring, and then make sure the initiator and explosives are separated in storage,” said Ferro in a mix of English and Cebuano.

Investigators in Beirut, Lebanon pointed to the city’s port as the origin of the explosion, which experts believed was equivalent to a 4.5 -magnitude earthquake.

Shortly before it occurred, firefighters and responders were trying to douse a fire that engulfed portions of Beirut’s port where highly explosive substances and chemicals were stored.

For Ferro, he said he didn’t believe the tragedy was caused by terrorist groups, considering that Lebanon has been involved in years of armed conflict.

“I doubt it was a terrorist attack because of the mode and motive And if (terrorism was the) motive, a terrorist group would claim of such attack immediately,” said Ferro.

PRO-7 also owned a storage facility where confiscated explosives and live ammunitions are locked away. But Ferro assured that police officers handling it are following the necessary safety protocols.

“We keep reminding them to be aggressive and always keep an eye out on the ammunition and magazines, and where you store them,” he added. /bmjo