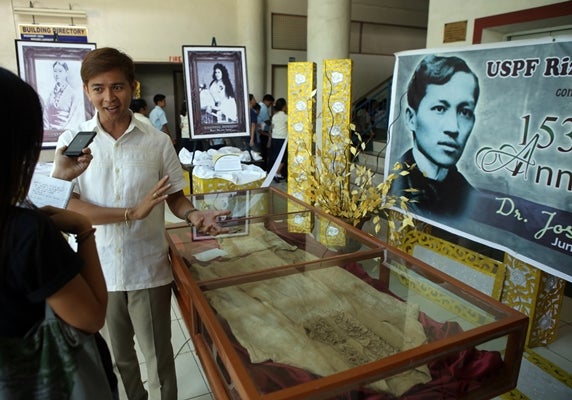 “The entrance to Cebu is beautiful. We could see the whole district of San Nicolas. The ship anchored beside a pier near a garden of Katuray… Almond trees. Nearby, they told me, were the government houses and that of Mr. Ventura Veloso.”

Those were the notes scribbled by national hero, Dr. Jose Rizal, as he documented his impressions of Cebu which he visited for a day on Aug. 2, 1896.

Rizal was on the deck of the steamship Espana which docked in Cebu for s stop over. He was en route to Manila from Dapitan City where he was exiled by Spanish authorities. Rizal kept a diary where his thoughts and musings were immortalized. The diary is under lock and key at the National Library in Manila, says historian Trizer Mansueto.

Alvin Zamora, curator of the University of Southern Philippines Foundation (USPF) museum which keeps a memorabilia of the national hero, said telling people how Rizal lived his life gives him a natural high.

“I always feel like I’m travelling back in time. Visitors would sometimes tease me that my being passionate about Rizal seemed like I have met him personally,” said Zamora.

“Rizal would never be forgotten. Everyone knows him, but what we need are activities that will intensify awareness regarding his herosim as well as his personal life,” said Zamora.

The USP museum have been holding activities to honor Rizal and share his life and works. Among the museum’s Rizaliana collection were a white nightgown, an undershirt and a gray coat which he wore in his travels abroad.

“The coat is kind symbolic since it is a witness of how Rizal valued education especially when he travelled abroad. He was very diligent and hardworking despite the lack of money, he was able to endure,” said Zamora.

And not everyone knows he only stands 4’11 in height. He said that it was never about the height but the desire to learn and the discipline to excel in which the youth should never forget and replicate.

“Rizal did ordinary things extraordinarily, he was able to manage his time well and valued money by that also I think it would also encourage students and youth, respect of parents,” he said.

Zamora explained that Rizal’s clothes which are encased in glass were donated by the national hero’s sister, Trinidad, when she visited USP on February 11, 1951.

“Her granddaughter, Concepcion Herbosa, taught in the school and had married Escolastico Duterte (the university’s vice president). She envisioned that the pieces of clothing owned by the national hero would help students learn more about him,” said Zamora.

The museum was put up in the late 1950s. A nude painting by Rizal, medals and replica copies of his greatest works, Noli Me Tangere and El Filibusterismo, are also on display in the facility.

A Katipunan flag, which Zamora claimed was given to Rizal for being an honorary member of the underground revolutionary movement is also on display at the USP museum.

The blood-stain on the flag, however, remains a mystery.