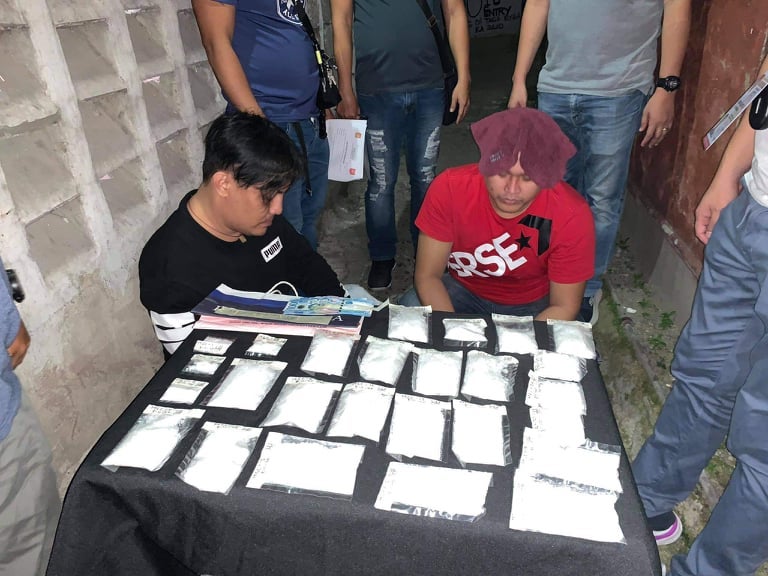 Police confiscate a kilo of suspected shabu and two high value targets during a buy-bust operation in Barangay Guadalupe at 10:35 p.m. of Tuesday, August 11. | Photo courtesy of Guadalupe Police Station

CEBU CITY, Philippines — Police confiscated more than a kilo of suspected shabu worth at least P7 million during an anti-illegal drug operation on the evening of Thursday, August 11, 2020 in Sitio Eyha, Barangay Guadalupe, Cebu City.

Police Major Randy Caballes, City Intelligence Unit head of the Cebu City Police Office, said that they also arrested two high value targets (HVTs) — one of them an ex-convict, who had been released from jail in May 2020 after serving time for illegal drugs — during the buy-bust operation at 10:30 p.m. on Tuesday, August 11.

He said that Cavan had been in and out of prison for drugs since 2013.

Police caught the two suspects with 1,100 grams or 1.1 kilos of suspected shabu during the buy-bust operation.

Caballes said that the confiscated suspected shabu had an estimated Dangerous Drugs Board value at P7,480,000.

He said that they placed Cavan under surveillance after they received reports that he had returned to selling illegal drugs.

Caballes said that the suspects were considered high-value targets because they could dispose 1 kilo of illegal drugs per week.

He also said that the suspects were even planning to expand their market from Barangays Guadalupe and Mambaling to Barangays Pardo and Duljo Fatima.

Cavan and Nisnisan were detained at the Guadalupe Police Station detention cell pending the filing of charges of selling and possession of illegal drugs./dbs