LSIs urged to get PCG approval before buying tickets 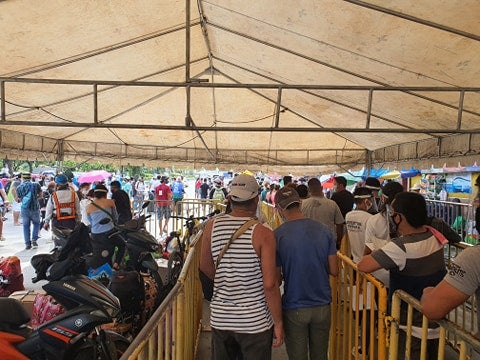 Many locally stranded individuals failed to get their tickets because the Philippine Coast Guard denied their requirements. | Contributed photo

Every local government unit (LGU) has different requirements for LSIs coming home and the PCG has to go through these requirements before allowing them to board any vessel.

The councilor said that to be safe, LSIs should get their requirements stamped by the PCG first before buying a ticket so they can be assured that they will be allowed entry to their ports of destination.

The problem lies with the provinces of destinations of the LSIs since various LGUs require different requirements. Some LGUs require medical certificate released within two weeks of travel, others require a Polymerase Chain Reaction (PCR) test results, and some require only rapid tests results.

The confusion has become a problem for the ports since some LSIs are not received well by their destinations and have to undergo other processes or even asked to go back to Cebu City.

To avoid such circumstances, Garganera said the PCG has to put its stamp of approval on the requirements and the ticket of the LSI before he/she can board any ship going home.

The PCG also coordinates with the LGU and port of destination on how many and who among the many LSIs will be traveling on a certain schedule.

(It’s not the PCG’s fault. They are only simplifying things. This is to ensure they will not face problem at the port of destination.)

On August 17, 2020, many LSIs complained of this additional process at the port because it caused confusion in buying the tickets.

An LSI, who asked for anonymity, told CDN Digital that they lined up for a long time amid the people flocking the PCG under the heat and the rain, with little disregard to social distancing.

She said many of the LSIs were denied approval by the PCG because their names were not on the list despite having complete requirements such as travel authority and certificate of acceptance from their destination LGU.

The PCG kept a list provided by the LGUs of destination to allow only their approved LSIs.

She said that her name was already endorsed by her locality, but the list was not transmitted to PCG Cebu yet, which was why she was among those denied by the PCG.

(I feel like crying with their process. It is draining.)

She said her efforts were made vain by the lack of order in the processing of the outbound tickets.

CDN Digital tried to reach PCG Cebu for their comment, but the agency has not responded to queries as of this posting. /bmjo

Read Next
Receiver of cargo found with P81.6M worth of drugs now in hiding