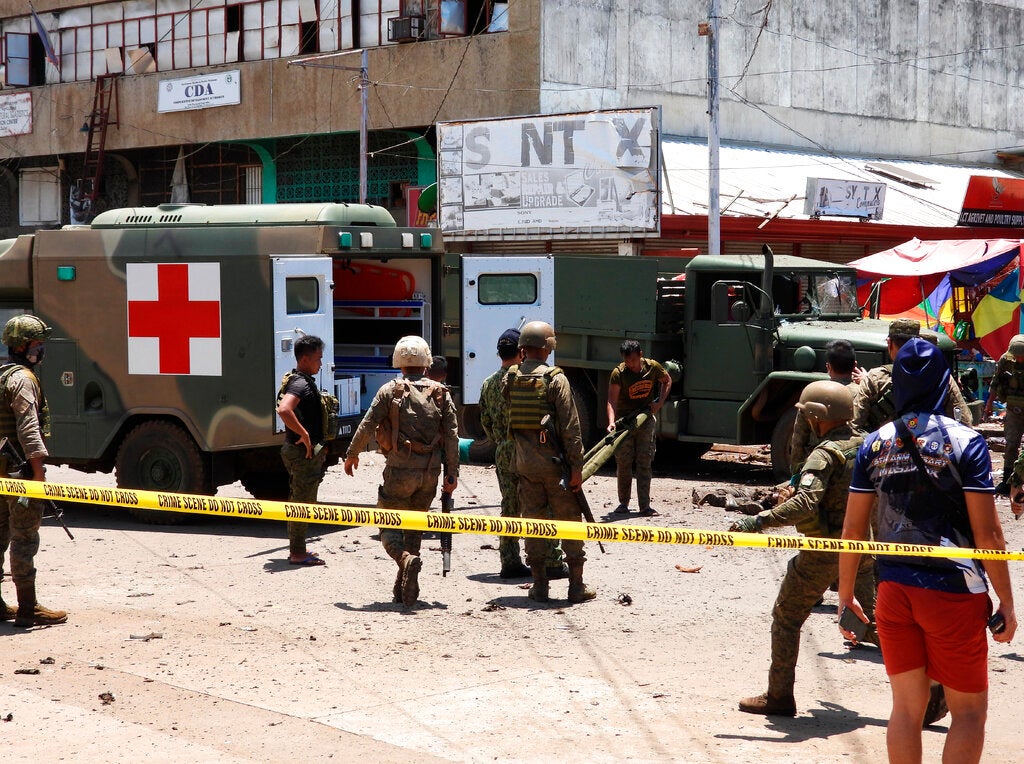 Soldiers retrieve bodies at a site of an explosion in the town of Jolo, Sulu province, southern Philippines, Monday Aug. 24, 2020. Bombs exploded in a southern Philippine town Monday, killing several soldiers and wounding other military personnel and civilians despite extra tight security due to threats from Abu Sayyaf militants. (AP Photo/Nickee Butlangan)

MANILA, Philippines — Military and police forces are tracking down at least three suspects  in the twin explosions last  week that rocked Jolo, Sulu which resulted in the death of 17 people, a Philippine National Police (PNP) official said on Sunday.

(It is still ongoing and there are suspects linked to the bombing in Sulu. I believe there are three suspects all in all that are wanted right now.)

Previous military reports said the explosions in Jolo, Sulu were carried by two female suicide bombers, who were said to be supporters of the Islamic State.

On Saturday, Zamboanga City Mayor Beng Climaco offered a P3 million bounty to anyone who can provide information about the whereabouts of the brains behind the blasts.

In a Facebook post, Climaco identified Mundi Sawadjaan, Abu Sayyaf Group sub-leader, as one of those involved in the Jolo bombing.

Aside from Sawadjaan, the mayor is also offering the same amount of reward to anyone with information that will lead to the apprehension of alleged Indonesian terrorist Andi Basco, who is also tagged in the Jolo bombing.

The local government is also looking for Reski Fantasya, a supposed Indonesian terrorist and bomb expert, who is tagged in the 2019 Mt. Carmel Cathedral bombing in Jolo. No specific reward was stated for the arrest of Fantasya.