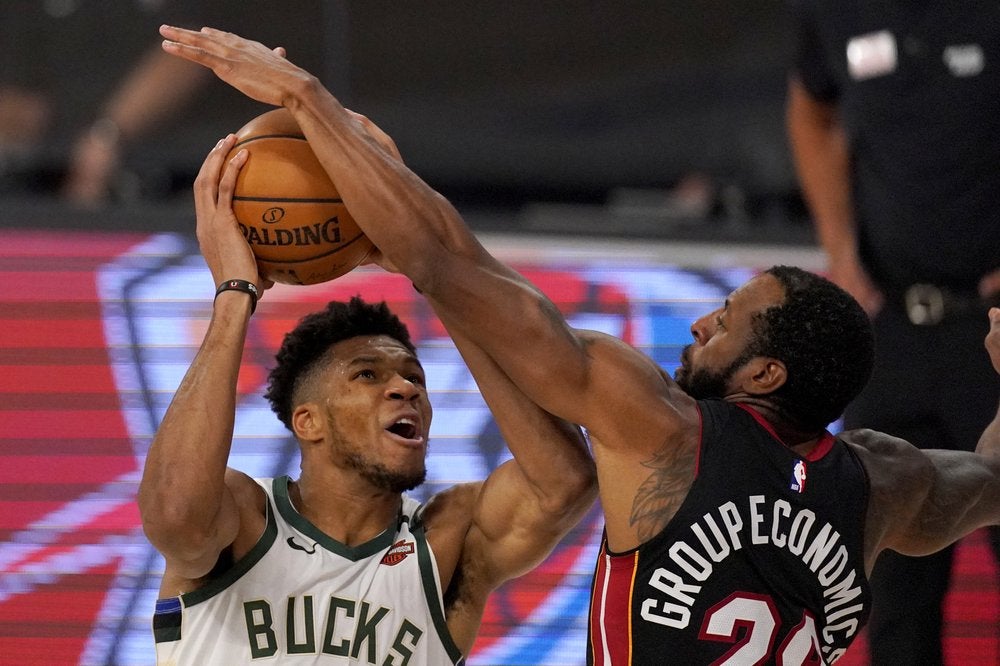 He listened to them, and delivered.

Butler scored 14 of his playoff career-high 40 points in the fourth quarter, Goran Dragic added 27 and the Heat clamped down defensively in the final three quarters to beat the Milwaukee Bucks 115-104 in Game 1 of their Eastern Conference semifinal series on Monday night.

“I felt like I took it up a level in the fourth quarter,” Butler said. “If that needs to happen every game, I’ve got to be able to do it. But we’ve got so many guys capable of doing it for us.”

Bam Adebayo had 12 points, 17 rebounds and six assists for the fifth-seeded Heat, who are 3-1 overall against the top-seeded Bucks this season. Tyler Herro added 11 points for Miami, which improved to 5-0 in the postseason.

Butler joined only LeBron James and Dwyane Wade — the first person who texted Butler postgame Monday night — as players with a 40-point playoff effort for Miami. He was 13 for 20 from the field, 12 for 13 from the line and 2 for 2 from 3-point land.

Khris Middleton scored 28 points for Milwaukee, which also dropped Game 1 of its first-round series against Orlando. Brook Lopez had 24 points on 8 for 10 shooting, and Giannis Antetokounmpo had 18 points, 10 rebounds and nine assists for the Bucks.

But Antetokounmpo’s night will likely be best remembered by what he did at the foul line: The reigning MVP went 4 for 12 from the stripe, the worst performance by anyone with at least 12 free-throw attempts in a playoff game since Andre Roberson went 2 for 12 for Oklahoma City on April 23, 2017 against Houston.

“He just has to stick with his routine, stick with what he’s been doing, continue to have a lot of confidence, continue to attack, continue to get to the free throw line,” Bucks coach Mike Budenholzer said. “He’s going to make them. We have total faith in him.”

Kyle Korver added 11 for the Bucks, who scored 40 points on the way to an 11-point lead after the first quarter — then managed 64 the rest of the way. The Bucks played without point guard Eric Bledsoe, out with a strained right hamstring.

“We’ve been here before,” Antetokounmpo said. “Going down 0-1 against Orlando, we did the same thing last year against Boston … We’ve got to come out and play Game 2, man. It’s a big game. Our season is on the line. We’ve got to come out, play hard, watch the tape, make the adjustment, be aggressive, make the right play and hopefully we can win the game.”

Miami led 92-86 after three quarters, after trailing for most of the game to that point — then managed only three points in the first 6:09 of the fourth quarter.

Marvin Williams’ three-point play with 7:40 left got Milwaukee within 95-93, and it stayed a one-possession game for nearly five minutes. Antetokounmpo scored for a 96-95 lead midway through the fourth, before Butler drove and got a baseline floater to fall on the next Miami possession to put Miami back on top for good.

“Just like they’ll be studying their film to get better, we’ll be doing the same,” Butler said.