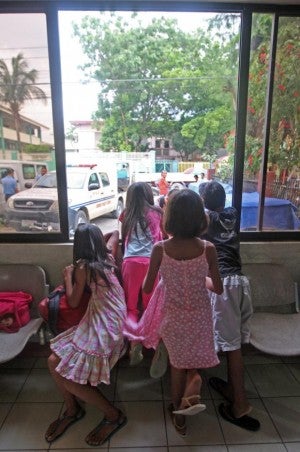 Some of the 20 rescued minors wait in the Cordova police station for their parents to fetch them. They spent the day or the whole weekend at a Cordova resort with Australian tourist Peter John Robinson. (CDN PHOTO/ TONEE DESPOJO)

The Australian tourist who was arrested on Tuesday for bringing local school girls to his room in a Cordova beach resort  had the cooperation of their parents.

In the room, the girls, aged 9 t 15,  were made to watch pornographic videos.

What other activities took place over the weekend, child rights advocates are still finding out.

This so bothered Lapu-Lapu City Mayor Paz Radaza she said  charges should be filed against the parents as well.

(I want charges filed against these parents who consented to have their children go with that foreigner to the resort .)

Parents who allow their children to be victims of abuses can be cited for criminal negligence.

Cordova police still have 51-year-old Peter James Robinson in custody pending the filing of charges of violation of the special law on anti-child abuse and exploitation or  Republic Act 7610 and possibly human trafficking as well under RA 10364.

About 20 minors, mostly girls, were rescued from the Cordova  Home Village, a resort  in barangay Buagsong,  Cordova town in a joint operation by social workers, police and the Children’s Legal Bureau.

There were four boys in the group.

PARENTS VISIT
“Robinson rented a room for the children but during daytime, the parents would visit.  This showed there is really coordination with the parents,” said the mayor.

One of the victims alerted social workers about the resort “holiday” with Robinson who checked in last Saturday, June  21.

Under the law, it is illegal for a person to keep in his or her company a minor 12 years or younger, who is not a family member or relative or has no legitimate relationship with the child.

The rescued minors were from barangay Basak, others from Olango Island and most from the mainland of Mactan.

The Australian engineer, who resides in Alabang, Metro Manila,  denied any wrongdoing and said there was nothing unusual with the presence of children because the resort was a  “family resort.”

Law enforcers said the ‘modus” of the foreigner was to befriend the parents of children first and give the minor a cellphone and P3,000 cash.

Two 17-year-old girls acted as accomplices in encouraging other children to come along.

The rescued children were taken into custody by social workers and are due for physical  and psychological examination.

“Some parents would deny knowing what was going on but the children would say that right now, their mothers are receiving cash from the Australian,” said Radaza.

One  girl told Cebu Daily News in Cebuano, “There are many rooms in the resort. Some parents just leave their children there.”

SEX TOURISM
Sex tourism and cyberpornography is a problem Lapu-Lapu City is trying to stamp out especially after the city recently launched its branding campaign for Lapu-Lapu as a wholesome tourism and heritage destination.

Cordova town is adjacent to Lapu-Lapu City in Mactan Island.

The liability of the resort is also something for the Department of Tourism (DOT) to look into.

Hembler Mendoza, Lapu-Lapu city tourism head and former president of the Hotel Resort and Restaurant Association of Cebu, said said tourism establishments have a duty to report any illegal activities happening in their premises.

“If  if they fail to do so, a corresponding penalty will be imposed. The worst case is if a case is filed against them,” he said.

Radaza said they will step up their alerts in barangays to warn the public about the ills of cyberpornography. She said many parents  use their poverty to justify their consent  and don’t know that human trafficking is a non-bailable offense.

“We have been monitoring two barangays that keep private computer shops but authorities have a difficult time of apprehending them because we need a willing complainant,” she said.

She ordered a team from the mayor’s office to confiscate these “peso net”  shops in the city because none of them have permits to operate.

LEWD ACTS FOR MONEY
PO2 Maria Ilona Cimafranca of the Cordova police said their investigation showed that Robinson invited the children to stay at the resort since Saturday night.

The minors were allegedly asked to perform lewd acts in exchange for money.

But older sisters of the victim who visited Robinson in his Cordova detention cell said they were just invited to the resort for an outing.

Police learned that a 17-year-old  was the one asked to videotape the children’s  activities in the room.

Nunez said a 15-year-old girl first approached a  Cordova social welfare officer for help after she was sexually molested by Robinson, whom she met through Facebook.

She was brought to Manila by Robinson.  Until now, said Nunez, the girl is traumatized and afraid to see the foreigner.

Police recovered a laptop and cell phone of the Australian which will be examined by a forensic expert.

Social worker Ermelita Degamo contacted the Children’s Legal Bureau (CLB). With the assistance of Cordova police, they went to the resort.

Mayor Radaza said she was waiting for the evaluation of CLB lawyers who are preparing the affidavits of the rescued children./With USJR intern Zona Mae Perez

Read Next
Cop was Davao mayor’s bet for police chief