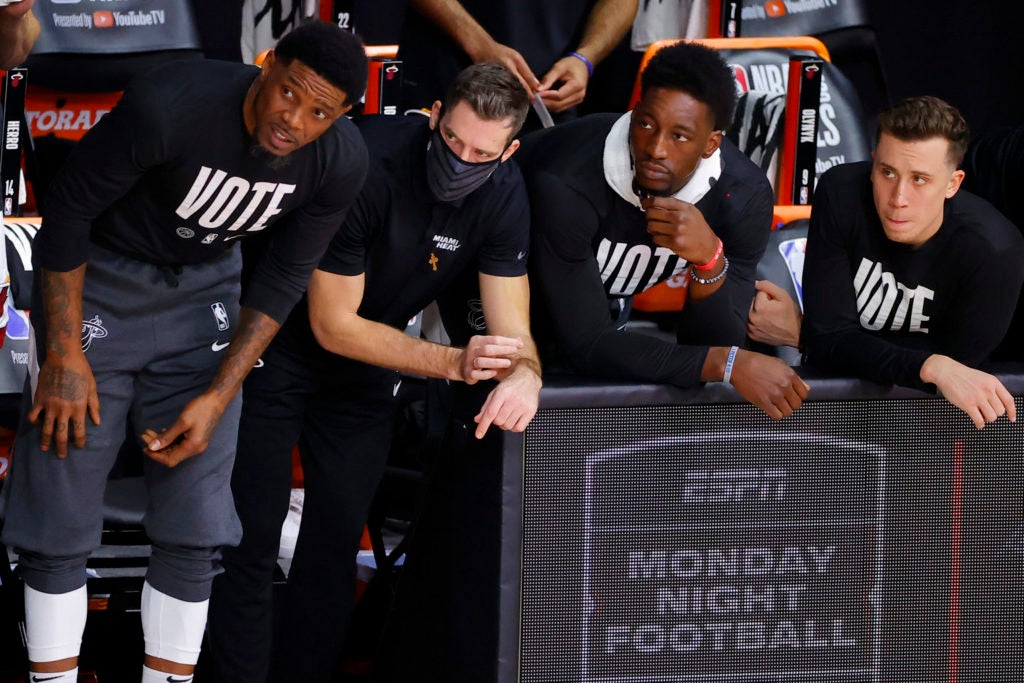 LAKE BUENA VISTA, FLORIDA – OCTOBER 02: Goran Dragic #7 and Bam Adebayo #13 of the Miami Heat look on from the bench during Game Two of the 2020 NBA Finals against the Los Angeles Lakers at AdventHealth Arena at ESPN Wide World Of Sports Complex on October 02, 2020 in Lake Buena Vista, Florida. NOTE TO USER: User expressly acknowledges and agrees that, by downloading and or using this photograph, User is consenting to the terms and conditions of the Getty Images License Agreement. Kevin C. Cox/Getty Images/AFP

Dragic, who has not played since limping out of game one with a torn plantar fascia in his left foot, is likely to miss a game that Miami must win to keep the best-of-seven series alive.

“Status is the same with Goran,” Spoelstra told reporters.

The Miami coach said there are no concerns surrounding Bam Adebayo, who returned to the line-up for game four on Tuesday after missing the previous two contests with a neck injury.

“Bam is going to be just fine tomorrow,” Spoelstra said. “I’m not getting into percentiles. His full competitive spirit will be ready to go tomorrow night.”

Spoelstra, meanwhile, struck a defiant tone when asked about the scale of the challenge confronting his team, who are bidding to become only the the second team in history to overturn a 3-1 NBA Finals deficit.

“Look, we think it’s a really competitive series,” Spoelstra said. “We have a purpose of why we’re here. We’re competing for a title, and it’s the first team to four wins. There’s a lot of different narratives out there.

“This is everything that we wanted this year, an opportunity to fight for, compete for a title, and that hasn’t changed at all through these first games.”

Spoelstra also backed his team to thrive in the win-or-go-home environment of the remaining games.

“I know the character of our group, and we are still very much committed to what our purpose is and look forward to the competition tomorrow,” Spoelstra said. “Whatever the storylines that are out there, we don’t care.

“Our guys are the ones who are out there in the arena marred by dust, blood, sweat and tears. Twenty-eight other teams aren’t out there.

“Everybody else is basically on their comfortable couches spectating on this one. Our guys are the ones that are in the arena, and that’s right where they are meant to be.”