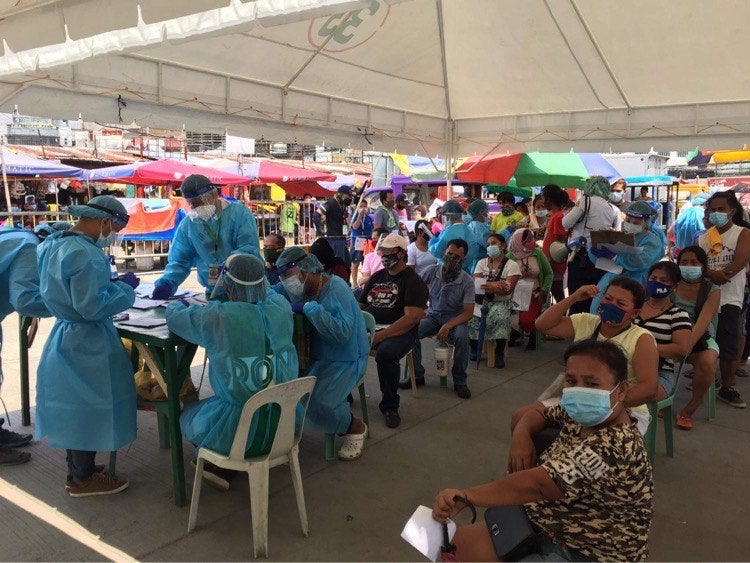 CEBU CITY, Philippines — Of the over 2,000 vendors in Carbon Public Market who participated in the pooled testing initiative, only 33 of them tested positive for the new coronavirus.

The Department of Health in Central Visayas (DOH-7) on Monday, October 12, announced the results of the pooled swab testing initiative conducted among sellers in Carbon market.

Dr. Mary Jean Loreche, spokesperson of DOH-7, said results of the eight-day program showed a low positivity rate, at 1.5 percent only, after they recorded only 33 out of 2,191 samples that tested positive for SARS-CoV-2.

“Our pooled testing has already ended last Friday (October 9), and we have gathered a total of 2,191 samples with only 33 who turned out positive. This means we have a positivity rate of 1.5 percent,” said Loreche.

SARS-CoV-2 is the causative agent of the coronavirus disease 2019 (COVID-19).

Carbon Public Market, Cebu City’s largest wet market that has over 4,000 vendors, was chosen as the pilot area for the pooled testing, an initiative by Project Antibody Rapid Test Kit (ARK).

Loreche said the program was successful, citing that its implementation was ‘very systematic and organized’.

The pooled swab tests conducted in Carbon market employed real-time polymerase chain reaction (RT-PCR) and the rapid antibody tests as a tandem in screening COVID-19 from a ‘pooled sample’.

The U.S. Center for Disease Control and Prevention (CDC) defines pooled sampling as combining respiratory samples from several people and conducting one laboratory test on the combined pool of samples to detect SARS-CoV-2.

In effect, it allows laboratories to test more samples with fewer testing materials, the CDC added.

“(What we did in Carbon) proves that when you do use pooled sampling, it’s very effective in (epidemiological) surveillance since this is a resource-driven initiative,” explained Loreche. /dbs