Made in Cebu tactical vessels turned over to police 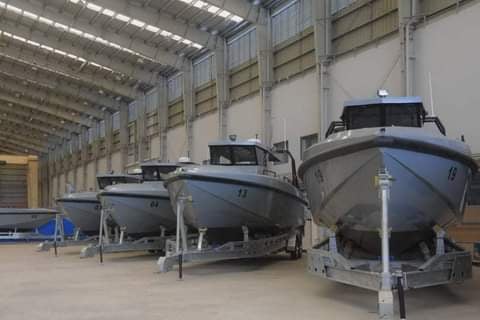 These are among the 22 high speed tactical vessels turned over to the police recently. | PRO-7 photo

CEBU CITY, Philippines– Twenty-two units of High Speed Tactical Watercraft, made by Cebuanos, were recently turned over to the Police Regional Office in Central Visayas (PRO-7).

The tactical vessels were built by a shipbuilding company called Dynacast that is based in Danao City, Cebu.

Police Brigadier General Albert Ignatius Ferro, director of PRO-7, said that the tactical vessels which were turned over last Thursday, October 16, 2020, would enhance the maritime law enforcement and will be able to monitor illegal actvities off the coast.

“The way to protect us from smuggling of illegal drugs and terrorism is having a strong police force in the maritime line,” said Ferro.

According to Ferro the watercrafts will be distributed to different maritime police units in the country to help secure the coastal areas of the country.

The tactical vessels being made in Cebu showed how good the Cebuanos are in craftsmanship and engineering, said Ferro.

“Ngilngig kaayo. At 47 knots, it was still stable,” said Ferro.

The tactical vessels were said to be powered by three outboard motors with a speed of more than 40 knots. The weapons attached to the vessels are  7.62 mm machineguns and automatic grenade launchers.