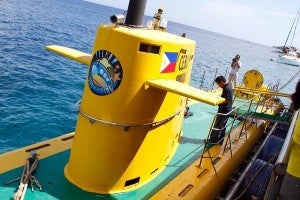 GROUNDED. The Cebu Yellow Submarine, the first tourist submarine in the Philippines, offers visitors an underwater view of the coast of Mactan island. (CDN FILE PHOTO)

The country’s only tourist submarine is in trouble again.

The Maritime Industry Authority (Marina) ordered the suspension of the Cebu Yellow Submarine last Thursday after it hit  a motorized boat off the coast of barangay Maribago, Lapu-Lapu City on its way to  port at Hadsan Beach Resort.

A report of the Philippine Coast Guard (PCG) said   the incident occurred  past 2 p.m. when the submarine was surfacing from under the sea, unaware that a  motorized boat  was blocking its way.

The collision caused  minor damage to the boat and broke the submarine’s antenna.

The motorized boat owned by Sujung Sesang Tour, a Korean outfit,  was anchored near the shore  but drifted into deep waters because of strong winds, said a staff member.

The accident was not reported to the police by  either party.

Rodulfo Villajuan, head of the PCG Mandaue Station,  reported the incident to the  Marina, which  ordered the suspension pending further investigation.

“We could have issued a suspension order but there’s already one from Marina so we will make our own investigation,” said Lapu-Lapu Mayor Paz Radaza.

City Hall suspended  the business permit of Cebu Yellow Submarine  in April last year after it was videotaped hitting a wall of corals in the Kontiki Wall,  a popular dive spot in barangay Maribago.

The management of the  Korean-owned tourist facility initially denied it happened then  apologized after City Hall launched its own investigation and awarded a Japanese diver who filmed the impact.

The submarine resumed operation in June 2013. Its Marina permit states that the submarine can only operate 500 meters from the shoreline. A team of scuba divers is also supposed to guide the vessel  to avoid  hitting corals  while  a Task Force Kalikasan representative is supposed to be on each trip under conditions set by City Hall.