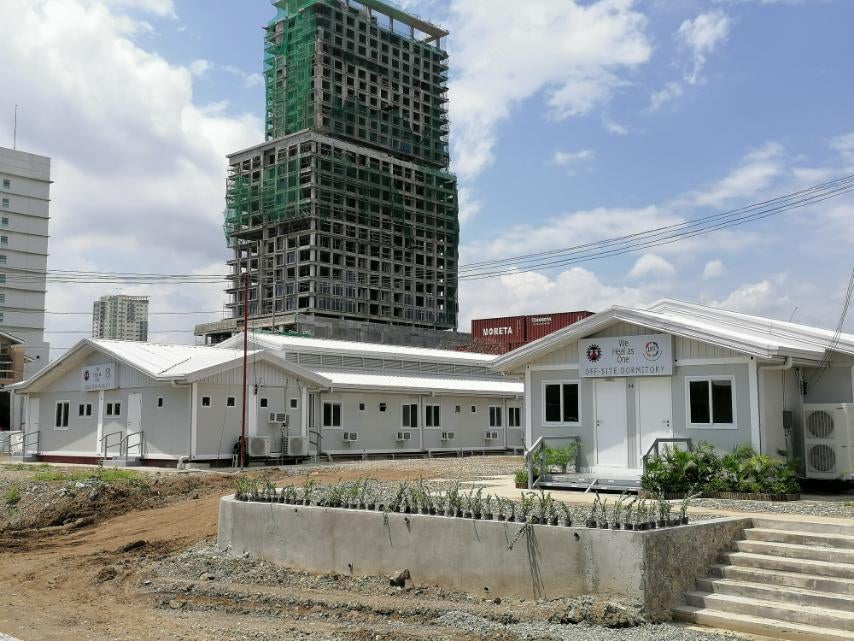 These isolation facility and off-site dormitory for frontliners within the Cebu City Quarantine Center compound at the North Reclamation Area in Cebu City on Oct. 23, 2020 have been turned over by the DPWH to the Cebu City government. | via Morexette Marie B. Erram #CDNDigital

On Friday, October 23, separate ceremonies were held to mark the completion of a total of 23 units composed of off-site dormitories, isolation centers, and ‘converted isolation facilities’ in Metro Cebu.

DPWH-7 reported spending P294 million for the construction of these facilities which formed part of the national government’s plans in addressing the coronavirus disease 2019 (COVID-19) crisis.

Off-site dormitories will house healthcare workers from public hospitals, who needed a place to stay after their attending to COVID-19 patients, while isolation facilities are for those who underwent COVID-19 tests and are waiting for their results.

Each dormitory features airconditioned rooms, a kitchen, a laundry area, and a common hall equipped with flatscreen television sets, and desktop computers.

The facility, according to DPWH-7, was also built with a negative pressure ventilation system ‘which blocks airborne transmission and prevents contaminated air from escaping the facility’.

The largest, which can accommodate around 100 healthcare workers, was constructed within Block 27 in North Reclamation Area, Cebu City.

At least six units of dormitories and one isolation facility were built within the city-owned property where the Cebu City Quarantine Center (CCQC) was also found.

Yvonne Feliciano, administrator of Cebu City Medical Center (CCMC), said slots in dormitories would be prioritized for healthcare workers from public hospitals who were taking care of COVID-19 patients.

“If there are any vacancies, we can start accepting those that come from private hospitals,” Feliciano said in a mix of Cebuano and English.

CCQC once housed patients confirmed to have COVID-19 with mild to moderate symptoms of the infection. As of October 23, however, Feliciano said there were no patients staying there.

“But if a healthcare worker, who tested positive of COVID-19 and is staying in the new isolation facility, they will be immediately transferred to CCQC,” she added. /dbs