The plans for Fiesta Señor 2020 will be presented to Cebu City gov't, IATF 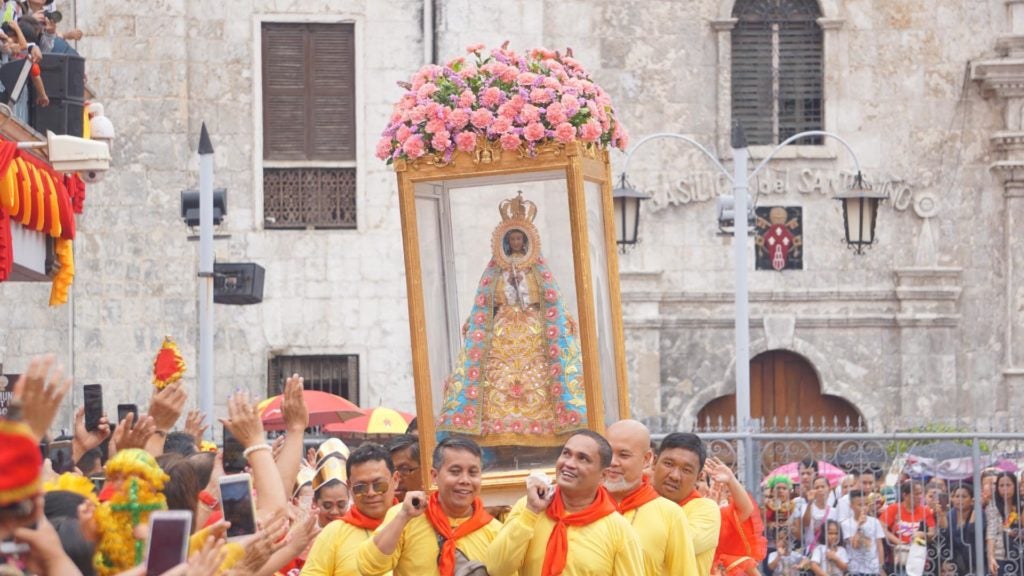 The veneration and procession of the images of Our Lady of Guadalupe and Señor Santo Niño inside the Basilica Minore del Santo Niño following the Fiesta Señor fluvial procession on Saturday, Jan. 18, 2020. | CDND Photo Raul Tabanao and Morexette Erram (file photos)

CEBU CITY, Philippines — Organizers of the Fiesta Señor 2021 are expected to roll out major and minor changes in the event with threats of the coronavirus disease 2019 (COVID-19) still prevalent.

And included in their plans was the proposal to have a province-wide motorcade of the image of the Holy Child if it meant encouraging people not to flock to Cebu island’s capital, Cebu City.

“It was among our plans, our recommendations to have a province-wide motorcade after the (culmination of the) Fiesta so that our Señor Sto. Niño will be nearer to pilgrims in the province,” said Councilor Philip Zafra in Cebuano.

The original image of the Holy Child, a gift bestowed to Queen Juana by Portuguese explorer Ferdinand Magellan, is enshrined in the Basilica at downtown Cebu City.

Among the plans the organizers presented before police and health officials in the region, according to Zafra, was to conduct a “Walk with Mary,” one of the events that formed part of the Fiesta Señor celebration, purely through motorcades only.

“If done through motorcades, these meant that people can no longer do foot procession because our major concern here is that if we will be having (foot) procession, social distancing cannot be maintained,” said Zafra in Cebuano.

As to the Traslacion, he said organizers agreed and proposed to authorities to cover national roads belonging in the tri-cities of Cebu, Mandaue, and Lapu-Lapu only.

“We will limit the routes of the Traslacion in national roads since we need wide spaces to ensure that social distancing is followed. We have to avoid narrow roads over concerns that they pose as obstacles in crowd control,” Zafra added.

Zafra also said the organizers recommended to have motorcades in Cebu province after the culmination of the Fiesta so that people would no longer have to travel and crowd in the streets of Metro Cebu would just have to join in the religious activities.

“It would be better if Señor Sto. Niño will be brought nearer to our fellow faithful residing in the province,” he added.

The Fiesta Señor is a week-long religious celebration in honor of Señor Sto. Niño. The culmination of the event is annually held every third Sunday of January together with the secular celebration of the equally famous Sinulog Festival.

Zafra said they would be presenting their plans before Cebu City Mayor Edgardo Labella within this week, who in turn would be the one to endorse them to the Inter-Agency Task Force for the Management of Emerging Infectious Diseases (IATF-MEID).

“But we have already sent a prior notice to the IATF that we’re already coming up with plans with Fiesta Señor 2021,” said Zafra.

“We are hoping for the possibility that the IATF will consider our plans, and approve them but we also expect for the worse. But God-willing and praying our plans won’t be completely overhauled,” he added. / dbs

Read Next
Apriel Smith tells fans this is not the end