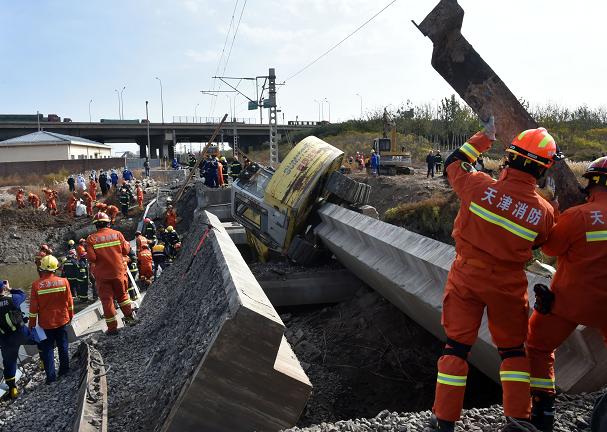 According to Jinbinhai news app, the accident occurred in the Tianjin New Bay Area at about 9 a.m. on Sunday, when the Tianjin South Ring Railway Maintenance Co was renovating the bridge on the k4+300 meter section of the Lingang railway, about 50 kilometers from the city’s downtown.

Teams of rescue workers, including medics, firefighters, and public security officers, were sent to the site soon after the accident. A total of 192 firefighters and 10 search and rescue dogs were at the scene, and search work was finished at about 6:30 pm, according to the website of the Ministry of Emergency Management.

The on-site head of the renovation project is now in the custody of the local public security department, and the cause of the accident is still under investigation.

The city’s Party chief, Li Hongzhong, and Mayor Liao Guoxun quickly went to the site to oversee rescue work and ensure priority was given to saving people’s lives, according to Tianjin Daily’s Wechat public account. They stressed paying close attention to renovation security and continuing the investigation.