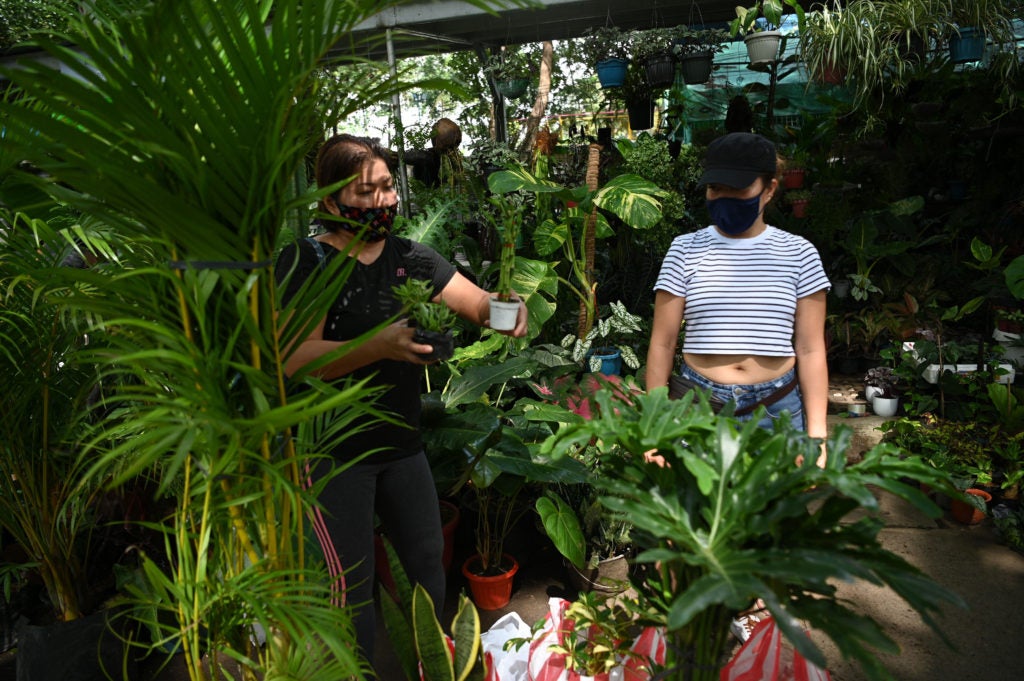 This photo taken on October 29, 2020 shows residents buying plants at a nursery in Manila. – A gardening craze dubbed “plantdemic” has spread across the Philippines after coronavirus restrictions fuelled demand for greenery, sending plant prices soaring and sparking poaching from public parks and protected forests. | Photo by Ted ALJIBE / AFP

A gardening craze dubbed “plantdemic” has spread across the Philippines after coronavirus restrictions fuelled demand for greenery, sending plant prices soaring and sparking a rise in poaching from public parks and protected forests.

Photos of delicate flowers and broad-leafed foliage cultivated in backyards and on balconies have flooded social media as housebound Filipinos turn to nature to relieve stress and boredom.

“It’s unbelievable. People are super interested in plants these days,” said landscape gardener Alvin Chingcuangco, who has seen prices for some varieties of monsteras reach 55,000 pesos ($1,140) each, compared with 800 pesos before the pandemic.

Demand remained robust even as prices for the most popular varieties of indoor plants, such as alocasias, spider plants and peace lilies, doubled or even quadrupled.

“It’s hard to understand people. When plants were cheap, they were ignored,” said the 40-year-old, who buys her plants in bulk from growers in nearby provinces.

But as demand has grown, authorities have warned that many plants on the market may not have been legally obtained.

Rangers patrolling the forests of Zamboanga in the country’s south for illegal loggers and wildlife poachers were ordered to watch out for plant thieves, after officials noticed some species posted on social media could only be found in the region’s protected areas.

“Prior to the pandemic we hadn’t observed many plant poachers,” said Maria Christina Rodriguez, Zamboanga regional director for the Department of Energy and Natural Resources.

“This only became popular during lockdown.”

Removing threatened species from forests is illegal under Philippine law and carries hefty penalties. Collecting other native plants is allowed but only with a permit.

But catching offenders is difficult — once the plant has been dug up and sold “it is hard for us to prove that it came from forests or our protected areas”, she added.

A spate of plant thefts from public parks in the northern city of Baguio prompted authorities to tighten security and issue a plea on Facebook for people to leave the greenery alone.

So far only five people have been caught for stealing flowers, said Rhenan Diwas, officer in charge of the Baguio City Environment and Parks Management Office.

“Maybe it’s because of boredom or they want to generate income,” he said.

The stress of lockdown and financial pressure caused by the pandemic have prompted many Filipinos to seek solace in their gardens, earning themselves the nicknames “plantitos and plantitas”, or plant uncles and aunties.

Read: Are you a ‘plantito’ or ‘plantita’ of Cebu?

“The safest way to make yourself happy is through growing little things,” said Norma Karasig Villanueva, former president of the Philippine Horticultural Society.

Long-time gardener Ivy Bautista, 30, said tending her plants helped to “kill boredom” and earn some money by selling cuttings from her extensive collection.

But she opposes the “insane” prices charged by other sellers, fearing it could drive plant poaching.

“It’s ridiculous, a plant that I purchased for 400 pesos is now selling for 5,000 pesos,” said Bautista.

In an editorial titled “Plantdemic” last month, the Philippine Daily Inquirer decried the high prices being charged and urged buyers to get their plants from sellers “with legitimate, lawful sources”.

Rodriguez in Zamboanga said she welcomed the interest in gardening, but wished they would plant flowers or edibles instead of native flora.

“Be responsible plantitos and plantitas and be mindful of where the plants are coming from,” she said.

“We’re really serious about this because it creates an imbalance in the ecosystem once the species are plucked out of their natural habitat.”