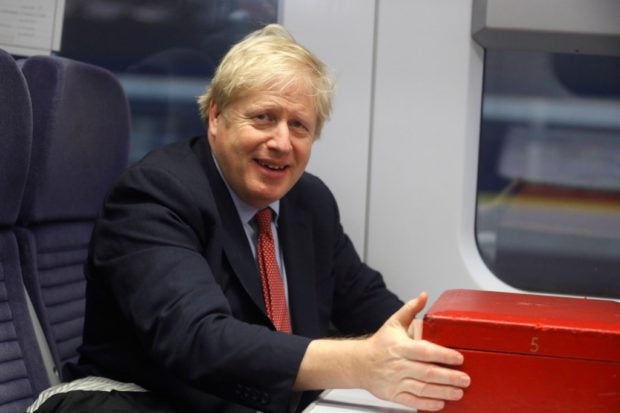 Britain’s Prime Minister Boris Johnson uses his ministerial red box brief case as he sits a board a train, while travelling from London to Kent on December 6, 2019, ahead of a Conservative Party general election campaign visit.  Photo by PETER NICHOLLS / POOL / AFP

LONDON — The British government on Tuesday blamed a “technical error” for an embarrassing gaffe in which Donald Trump’s faded-out name appeared in a congratulatory online statement to Joe Biden.

I just spoke to @JoeBiden to congratulate him on his election. I look forward to strengthening the partnership between our countries and to working with him on our shared priorities – from tackling climate change, to promoting democracy and building back better from the pandemic.

“As you’d expect, two statements were prepared in advance for the outcome of this closely contested election,” said a Downing Street spokesman.

“A technical error meant that parts of the alternative message were embedded in the background of the graphic.”

Johnson famously prepared two newspaper articles arguing for and against Britain’s departure from the European Union before leading the Brexit campaign in 2016.

Despite the error, Johnson on Tuesday became the first European leader to talk to Biden after his victory.