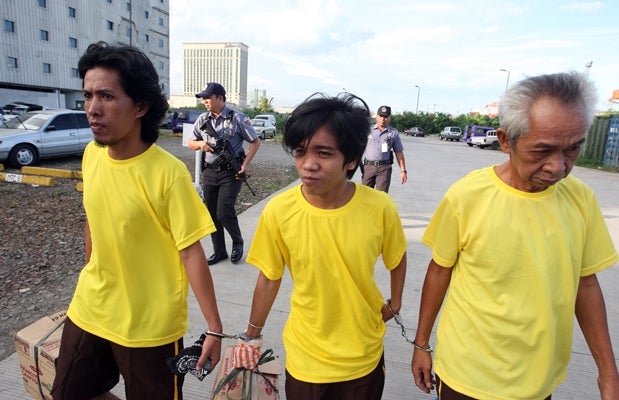 Members of the Moro National Leberation Front (MNLF) members after the hearing here in Cebu over the road side bombing that killed two US soldiers and Philippine Marines five years ago. (CDN PHOTO/TONEE DESPOJO)

SECURITY was tight at the Qimonda Building in Cebu City’s port area yesterday for the trial of three suspected Moro rebels who were linked to the 2009 ambush of a military convoy in Sulu.

Two American soldiers and a Filipino marine trooper were killed in that clash.
Police, backed by heavily armed soldiers from the AFP Central Command, were deployed in the building and its vicinity as early as 9 a.m.

Three captured rebels were bused in from the Cebu City jail for their 2 p.m court date.

At least five Americans, reportedly from the US Federal Bureau of Investigation were also spotted in the courtroom of Judge Alexander Acosta of the Regional Trial Court Branch 9.

The trial of the suspected members of the Moro National Liberation Front was moved to Cebu City in 2013 for security reasons. Only three of 30 respondents to the multiple murder charge appeared in yesterday’s hearing.

Mihadji Hamjudah entered a plea of “not guilty” plea after the charges against him were translated for him in the Tausug dialect.

The trial proceeded after his arraignment.

The prosecution called to the witness stand Isaac David Simpson, a US Army soldier who was in the waylaid convoy.

Simpson said in his affidavit that they were set to deliver food to a Philippine Marine detachment in barangay Luam Siang in Indanan, Sulu in the morning of Sept. 29, 2009 and were to be met by Filipino soldiers. Before they left their camp, they were tipped off that explosives were planted along the road to the Marine detachment.

Simpson said he was aboard an armored Humvee when he heard a loud explosion. He said he saw the lead car driven by Staff Sgt. Jack Martin with Sgt 1st Class Christopher Shaw and three Filipino soldiers on board flip over. Martin and Shaw and a Filipino soldier were killed.

Those killed were members of the US Navy Seabees (construction battalion) involved in humanitarian projects in Sulu and non-combatants, said Maj. Gen. Benjamin Dolorfino, then chief of the AFP Western Mindanao Command.

The US Department of Defense, in a separate statement, however, identified the fatalities as belonging to the US Army Special Forces.

Simpson said the US soldiers were tasked, among others, to construct a school and dig a well for residents of barangay Kagay.

“I was surprised. I wasn’t expecting to get attacked, especially that we were helping the people,” he told the court.

The Philippine and US military initially attributed the attack to Abu Sayyaf bandits, but a group allegedly identified with the MNLF surfaced and claimed responsibility.

Abtaji, the second witness, will resume his account today after his testimony was cut short due to time constraints.

Cebu City Mayor Michael Rama yesterday reiterated his displeasure with the transfer of the high-profile case to his city.

“We have our own peace and order concern in the city that we have to address then they add another high profile case. The crime did not happen in our territory. It happened somewhere else so why is the hearing held here?” he said.

Rama said he will ask the Police Coordinating and Advisory Council to request the national government to have the suspected rebels detained elsewhere. /with Correspondent Edison delos Angeles