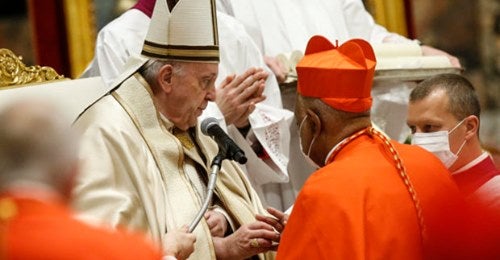 US Archbishop Wilton Gregory of Washington (R) receives his biretta from Pope Francis as he is created Cardinal during a consistory to create 13 new cardinals, on November 28, 2020 at St. Peter’s Basilica in The Vatican. (Photo by FABIO FRUSTACI / POOL / AFP)

VATICAN CITY – Pope Francis created 13 new cardinals on Saturday — including the first African-American — putting his personal stamp on the body that will one day choose his successor.

Under the soaring dome of St Peter’s Basilica, the new “princes of the Church” knelt one by one at the feet of the 83-year-old pontiff, who placed the quadrangular scarlet cap, or biretta, on their heads.

The diverse group — whose members hail from Italy, Malta, the Philippines, Chile, Brunei, Mexico and the United States — reflect not only the changing face of the church of 1.3 billion faithful, but also the Jesuit pope’s belief in priests focused on the world’s poor.

The 72-year-old Archbishop of Washington, Wilton Gregory, told AFP on Friday he was a “symbolic individual” for being made the first African-American cardinal.

Since Francis’ election in 2013, the Argentine pope — the first from the Americas — has created 95 new cardinals in ceremonies known as consistories.

Those named by Francis now make up the majority of those cardinals under the age of 80 who will elect his successor.

That increases the chances that the pope’s efforts to make the Roman Catholic Church more inclusive, transparent, and more focused on defending the most vulnerable members of society, may continue after his death.

During the ceremony, Francis warned the new cardinals not to be seduced by their new “eminence” and stray from being “close to the people”.

“The scarlet of a cardinal’s robes, which is the colour of blood, can, for a worldly spirit, become the colour of a secular ’eminence’,” said Francis. “When you feel that, you will be off the road.”

Typically, all the world’s cardinals travel to Rome to welcome the newly promoted cardinals during the consistory.

This year, however, many did not attend, and coronavirus restrictions prevented travel for two new cardinals — Archbishop Jose Fuerte Advincula of the Philippines and Cornelius Sim, the Apostolic Vicar of the Muslim-majority nation of Brunei.

Only about 40 current cardinals, all in masks, were in attendance, sitting spaced apart before a limited audience of guests.

Due to the coronavirus, the tradition of exchanging “a kiss of peace” with the pope and all the other cardinals was suspended.

Nine cardinals in the latest group are under the age of 80 and thus eligible to join a conclave to elect the next pope upon the death or resignation of Francis.

Francis’ choices reflect not only a desire to promote non-Europeans within the church, but the pontiff’s personal fight against social inequality and poverty.

The Philippines’ Advincula said he believed the pope chose him to acknowledge Catholics living in far-flung areas from Rome.

“I always thought that the Church has to be closer to the people, especially those that are in the peripheries,” Advincula told Vatican News last month after being named. 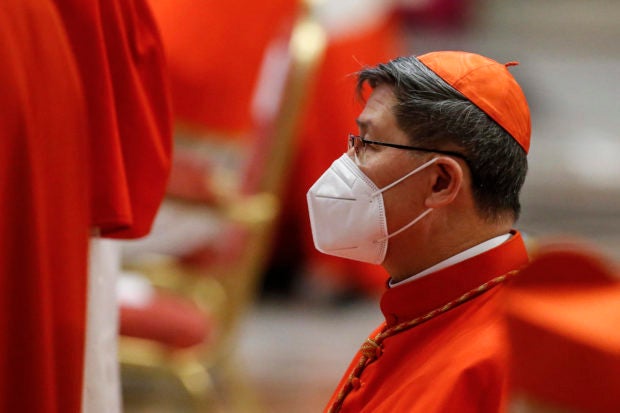 The group of cardinals also includes Mexico’s Bishop Emeritus Felipe Arizmendi Esquivel, who has worked among the indigenous population of the poor region of Chiapas, and Archbishop Antoine Kambanda of Rwanda, who lost most of his family in the 1994 genocide.

Francis also named the Archbishop of Santiago, Celestino Aos Braco, in a nod to the challenges ahead in restoring confidence in the Church in Chile in the aftermath of a widespread sex abuse scandal and coverup.

The group of six new Italian cardinals includes Augusto Paolo Lojudice, the current archbishop of Siena, known for his defence of Roma people, and the Franciscan priest Mauro Gambetti, guardian of the Holy Convent of Assisi, the city of Saint Francis.

On Sunday, Francis will celebrate a traditional mass with exclusively the new cardinals participating.