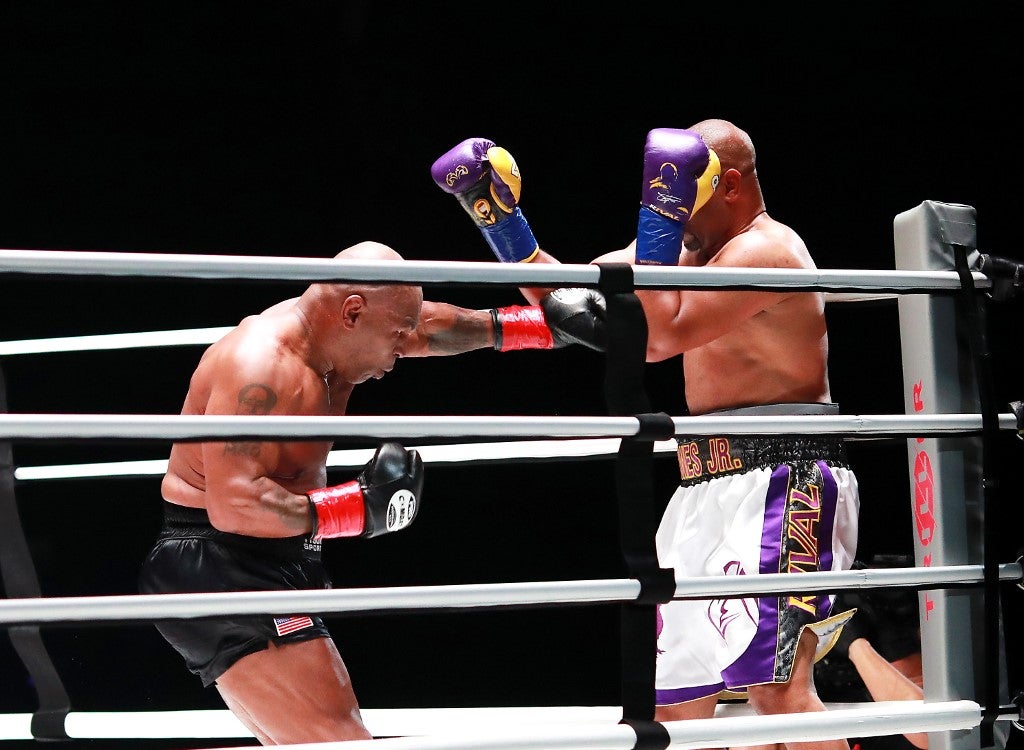 Mike Tyson plans on fighting more exhibitions after a draw with Roy Jones Jr. on Saturday in his comeback at age 54 and Jones says he’ll be tough to beat.

“I’m happy I’m not knocked out or anything. I’ll be better the next one,” Tyson said after the eight-round exhibition at Staples Center in Los Angeles.

“I could have done everything better. God willing I’ll be better the next exhibition.”

The showdown of former heavyweight champions saw Jones, 51, thinking he won the fight but impressed at the stamina and strength showed by Tyson.

“It surprised me he could go eight rounds,” Jones said. “He could go with anybody. If he connects, you’ll have a problem. He can do anything he wants to do.”

A three-judge panel scored the bout a draw, with no details announced, but Jones didn’t mind that result so much.

“I thought I won the fight, jabbed better and controlled the fight, but I’m cool with a draw,” Jones said. “We both made it out cool and everybody got entertained.”

Tyson hopes to stage more bouts, as many as one every other month to stay in fighting shape, mentioning such possible venues as Monaco or France.

“Anything is possible. The sky is the limit,” Tyson said. “I’m capable of helping a lot of people all over the world.”

Tyson, who hadn’t climbed into the ring for a bout in 15 years, said he doesn’t see his return as an ego effort, having dropped 100 pounds to get himself into fighting shape.

“I don’t think it’s a mid-life crisis with me,” Tyson said. “I think it’s my ego and my ego tells me to do things I’m afraid of doing. I’m very happy I did this. I will do it again.”

Far from the “Iron Mike” of his dominating heavyweight champion days of the late 1980s, Tyson revels more in going the distance rather than aiming for knockouts.

“I was just happy to go the distance with him. That’s real fighting, having the endurance,” Tyson said. “You’re not going to knock everybody out. I used to go for the quick kill. I’m training for distance now.”

“I don’t expect to win. I expect to go eight rounds and entertain the crowd.”

Even with rounds cut to two minutes and bigger than usual gloves in safety moves ordered by state boxing officials, Tyson was able to produce more than enough punching power for Jones, who grabbed Tyson for much of the fight.

“I’m happy to scratch this off my bucket list,” Jones said. “Everything hurt when he made contact and it makes you so fatigued. I think I felt the uppercut the most. My jaw still feels it.”

Tyson says he has modest goals and simple needs these days, having long ago set aside the need for mansions, boats, cars, drugs and a wild lifestyle and now favoring his ability to raise funds for charities such as supporting needy youth.

“The old Mike Tyson no longer exists,” he said. “This is a better cause for me. I’m here for a purpose.