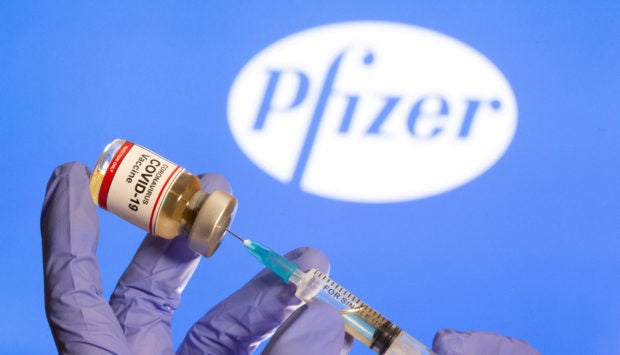 A woman holds a small bottle labeled with a “Coronavirus COVID-19 Vaccine” sticker and a medical syringe in front of displayed Pfizer logo in this illustration taken, October 30, 2020. REUTERS/Dado Ruvic/File Photo

MANILA, Philippines — US pharmaceutical firm never promised to provide the Philippine government with 10 million doses of its coronavirus disease 2019 (COVID-19) upon the signing of a Confidential Disclosure Agreement (CDA) between the two parties, Health Secretary Francisco Duque III said Thursday.

Duque made the remark after Senator Panfilo Lacson claimed that the country would have secured the delivery of 10 million doses of the COVID-19 vaccine from Pfizer as early as January next year if Duque had worked on documentary requirements needed for the deal.

According to Duque, there were only “indicative” numbers that were mentioned during official talks between the Philippine government and Pfizer for the procurement of the vaccines.

“No, walang ganoon (there was no such thing like that). It was all indicative numbers. There was no definitive supply. I think if you will get a chance to talk to Sec. Galvez, he would tell you there is a problem in the production of these vaccines as we are talking because meron daw problem sa kanilang (because there is a problem in their) raw materials,” he said in an interview on ABS-CBN News Channel. 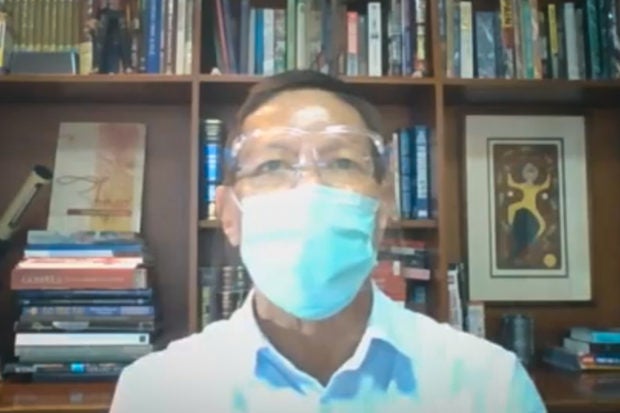 He said there was nothing binding as to the number of doses that would be provided by Pfizer.

“Besides, there was nothing binding. Nothing in our talks. So this was all open-ended, exploratory, and it was really meant to just get the data from Pfizer to know more about the safety profile of the vaccine, efficacy, result of the clinical phase 1 and 2 trials because at that time they are still not done with their clinical trials phase 3,” he explained.

“The thing is I do not recall that na mayroong ganoong definitive, na, ‘ah makakakuha tayo ng (we will get) 10 million doses.’ There was nothing like that. Everything was indicative,” he further said.

Duque added that there was no deadline set by Pfizer on the signing of the CDA.

“No deadline was set by Pfizer. Nothing in all our documents. Nothing would show that there was a deadline.”

Lacson dropped the name of Duque after Foreign Affairs Secretary Teodoro Locsin Jr., the other day stated that he and Philippine Ambassador to the United States Jose Manuel “Babe” Romualdez had arranged for the delivery of the vaccines with the help of US Secretary of State Mike Pompeo.

“That said, my thanks just the same to … Pompeo. We—Babe Romualdez and I—got 10 million doses of Pfizer financed by World Bank and ADB to be shipped thru FedEx to Clark (airport) in January,” Locsin tweeted.

“BUT SOMEBODY DROPPED THE BALL. I have steel ball bearings. I just need a slingshot,” he added.

Duque had earlier denied there was negligence on the part of the Department of Health (DOH).

He explained that it was only on September 24 that the DOH was informed that instead of the Department of Science of Technology, the DOH would be the agency to sign the deal with Pfizer.

“I have the chronology of events so that this is all documented, and there is no such a thing that I did not act quick enough.

“Marami tayong proseso (We have a lot of processes.) We cannot just be buying vaccines like we are buying a box of chocolates. There are so many logistical issues,” he added.