Wet, windy weekend due to TD Vicky; Signal No. 1 in parts of Luzon, Visayas, Mindanao 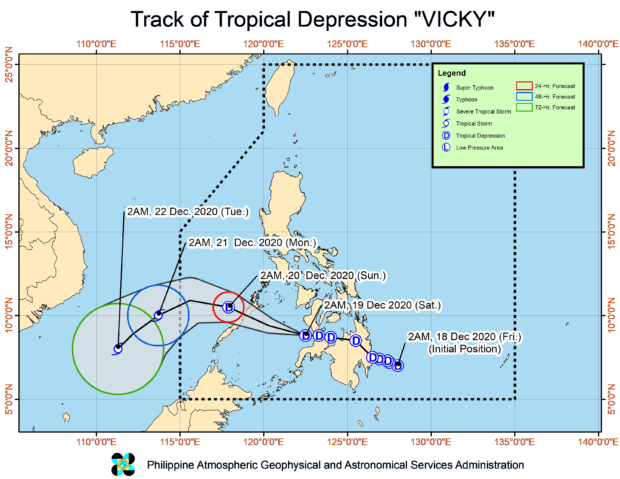 MANILA, Philippines – Moderate to intense rainfall and strong winds are expected in many parts of the country on Saturday due to the combined effect of Tropical Depression Vicky and the tail-end of a frontal system, the Philippine Atmospheric, Geophysical and Astronomical Services Administration (Pagasa) said.

Tropical Cyclone Wind Signal Number 1 remains in effect over parts pf Luzon, Visayas and Mindanao as Vicky is forecast to cross the central or northern part of Palawan this afternoon.

Vicky was spotted at 7 a.m. some 240 kilometers west of Dipolog City, Zamboanga del Norte or 285 kilometers east southeast of  Puerto Princesa City, Palawan and over the Sulu Sea with maximum sustained winds of 45 kilometers per hour (kph) near the center and gustiness of up to 55 kph, while moving west at 25 kph. 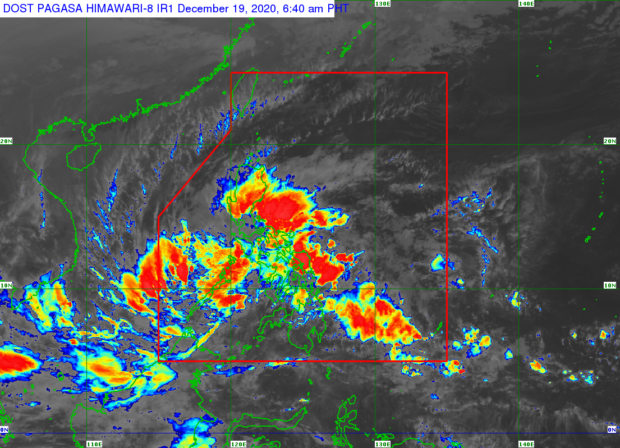 ‘Watch out for flash floods, landslides’

“Flooding (including flash floods) and rain-induced landslides may occur during heavy or prolonged periods of rainfall, especially in areas identified to be highly or very highly susceptible to these hazards and in localities that received significant antecedent rainfall over the past couple of days or weeks. Adjacent or nearby areas may also experience flooding in the absence of such rainfall occurrence due to surface runoff or swelling of river channels,” said Pagasa.

Read Next
So who really dropped the ball?