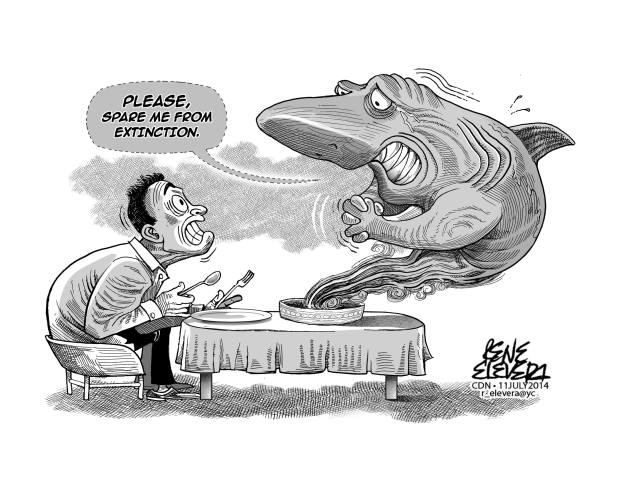 Public awareness of the need to conserve the ocean’s apex predator – the sharks – was heightened  when its  slaughter and consumption was exposed in Cebu lately.

“We are banning shark fin carriage effective immediately as we learned that unsustainable shark fishing and our carriage of shark fin is not aligned with (our) position on sustainable development,” Cebu Pacific Airways said in a statement.

Last April, flag carrier  Philippine Airlines announced that it would  no longer accept shipments of shark and shark products. “PAL takes the issue on protection and conservation of endangered marine life seriously, recognizing that the company’s long-term interest is and should be consistent with sustainable and responsible business practices,” is said in a statement.

These developments are indeed heartening as conservation groups struggle to stop the senseless killing  of sharks.

Fear of sharks is mostly based on myth. Hollywood is partly to blame for it, portraying sharks as savage maneaters in films like “Jaws”.

Behind this myth is something more sinister – human appetite.

Human consumption, we found out, is so  pervasive  shark meat is no longer a high-priced delicacy but shows up in fish balls and seafood tempura, popular street food.

Cebu had made headway in shark conservation.

But there’s a whole trade of  shark hunting for meat, fins, and liveroil to keep law enforcers busy.

Gov.  Hilario Davide III, in his state of the province address, mentioned his administration’s commitment to coastal and marine conservation.

He reported that in his first year at the Capitol, the Provincial Task Force on Illegal Fishing has apprehended seven commercial fishing boats illegally plying municipal waters and over 30 trucks of illegally caught fish.

Greenpeace Southeast Asia Ocean campaigner Vince Cinches, a Cebuano, rightly observed that “it is important to aggressively influence the rest of the country including national government agencies in the conservation of our seas, fisheries and sharks by providing or hosting venues for skills and ideas sharing. Cebu is an important springboard to highlight problems and solutions surrounding our archipelago nation. Recovering the Visayas sea from illegal and unregulated fishing could be an important milestone.”

The task of conserving sharks is big. Pressure should be applied on all fronts.

With the country’s two biggest air carriers joining the cause, we should expand the call to declare  all airports in the country shark-free.