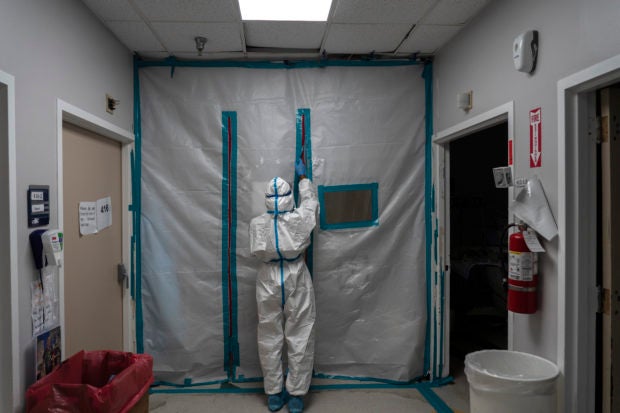 A medical staff exits the COVID-19 intensive care unit (ICU) on New Year’s Day at the United Memorial Medical Center on January 1, 2021 in Houston, Texas. According to reports, Texas has reached over 1,760,000 cases, including over 27,800 deaths. (Go Nakamura/Getty Images/AFP)

WASHINGTON – The United States marked the New Year on Friday by passing the extraordinary milestone of 20 million COVID-19 cases, after global celebrations welcoming in 2021 were largely muted by the pandemic.

The US has floundered in its efforts to quell the virus, which is spreading rapidly across the country and has already caused over 346,000 deaths — by far the highest national death toll.

Worldwide hopes that COVID-19 vaccines will bring a rapid end to the pandemic in 2021 have been shaken by the slow start to the US vaccination program, which has been beset by logistical problems and overstretched hospitals.

Nearly 2.8 million people in the US have already received their first jabs, but the figure fell well behind the 20 million inoculations that President Donald Trump’s administration promised by the end of 2020.

The desperate race to vaccinate is set to dominate the coming year, with the coronavirus already killing at least 1.8 million people since emerging in China in December 2019, according to a tally from official sources compiled by AFP.

German firm BioNTech said Friday it was racing to ramp up production of its COVID-19 jab to fill a shortage left by the lack of other approved vaccines in Europe.

Countries including Britain, Canada and the United States approved the Pfizer-BioNTech vaccine earlier, and have since also greenlighted jabs by US firm Moderna or Oxford-AstraZeneca.

“The current situation is not rosy, there’s a hole because there’s an absence of other approved vaccines and we have to fill this gap,” BioNTech co-founder Ugur Sahin told Der Spiegel weekly.

Waiting for the vaccine

Criticism of the slow pace of the vaccine rollout has grown louder in recent days.

In Germany, senior doctors have complained that hospital staff are left waiting for vaccines despite being in a priority group.

France has seen similar complaints, prompting the government to announce that health workers aged over 50 could get the shot from Monday — sooner than originally planned.

The French government on Friday announced that a nationwide nighttime curfew would be lengthened in 15 regions where infections are high. The curfew will begin at 6:00 pm rather than 8:00 pm, including in the Mediterranean city of Nice.

“The virus is continuing to spread… but with a disparity between regions,” said a French government spokesman, confirming that theaters, cinemas and concert halls would not be able to reopen on January 7, the most recent earliest date given.

Also in France, some 2,500 partygoers attended an illegal New Year rave near Rennes, clashing with police who tried to stop it, authorities said.

But worldwide, normally extravagant midnight celebrations in cities such as Sydney, New York, Rio de Janeiro and Edinburgh were scaled back or cancelled, and crowds banned from attending.

Rio saw one upside: 89 percent less garbage on Copacabana beach, which is left clogged with trash each year after its New Year party.

“We were ready for any scenario. But congratulations to the people of Rio, who listened to the authorities’ calls to avoid large crowds and stay home,” said municipal sanitation chief Flavio Lopes.

Travelers braving trains between London and Paris on the first day after Britain’s exit from the EU customs union experienced additional checks but appeared more worried by the extra rules required for travel due to Covid-19.

“I wasn’t supposed to be home for the holidays but there was an emergency. I bought my ticket at the last minute, with a test (for Covid-19) costing 200 pounds (225 euros, US$270),” said Stephanie Bapes, a 35-year-old Frenchwoman who lives in London.

Britain said Thursday that it had vaccinated almost 950,000 people, as a surge in coronavirus cases prompted the reopening of field hospitals.

Experts believe the worst is yet to come globally, predicting a sharp rise in cases and deaths after weeks of holiday gatherings.

According to Johns Hopkins University, the US hit a record number of daily deaths on Wednesday when more than 3,900 people died of Covid-19.

President-elect Joe Biden, who takes office on January 20, has criticized the troubled vaccine rollout, and implored Americans to wear masks.

Under Trump, US authorities have given often mixed messages on mask-wearing, social distancing and shutdowns, and the outgoing president has repeatedly downplayed the risks.

But in his New Year’s Eve message, Trump hailed his administration’s response, saying “our most vulnerable citizens are already receiving the vaccine, and millions of doses are quickly being shipped all across our country.”

The World Health Organization on Thursday granted emergency validation to the Pfizer-BioNTech vaccine, paving the way for countries worldwide to quickly approve its import and distribution.